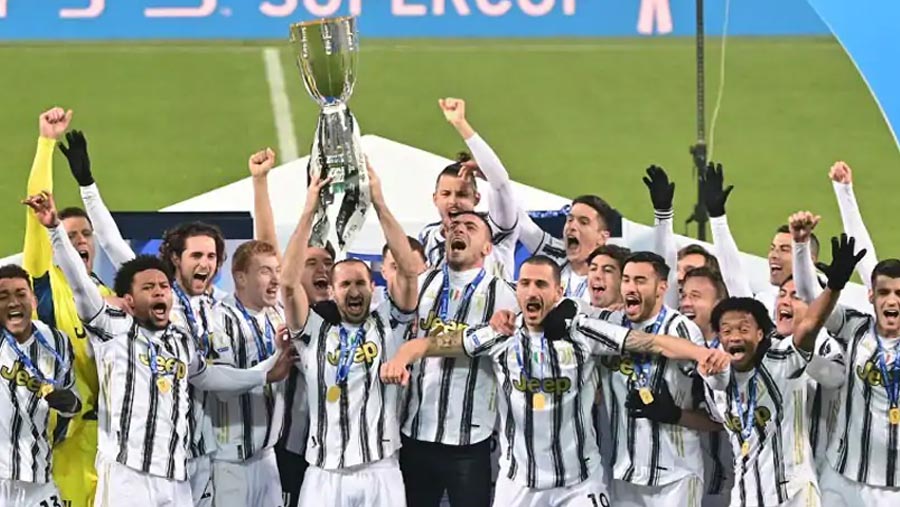 Cristiano Ronaldo scored to help Juventus win a record-extending ninth Italian Super Cup by beating Napoli 2-0 on Wednesday (Jan 20). Napoli missed the chance to take the match to extra time when captain Lorenzo Insigne missed a late penalty and Alvaro Morata sealed the result with the last kick of the game.

Andrea Pirlo won his first trophy as a coach on Wednesday (Jan 20) as Juventus beat Napoli 2-0 in the Italian Super Cup.

Cristiano Ronaldo blasted in his 20th goal of the season following a corner on 64 minutes in Reggio Emilia, before Napoli captain Lorenzo Insigne missed a penalty and Alvaro Morata added a second deep into injury time.

Pirlo, 41, clinched his first silverware five months after taking over at his former club where he won four league titles.

“Winning a first title (as a coach) is a great joy, different from that felt as a player, it’s even more beautiful,” said Pirlo, who lifted the trophy three times as a player with Juventus and AC Milan.

Juventus won the annual trophy, played between the league champions and Italian Cup holders, for the ninth time, having finished runners-up last year to Lazio.

“This trophy is very important because it can give us confidence for the rest of our season,” said Ronaldo.

“The Scudetto is possible, Milan and Inter are very strong, but there are still a lot of games to be played and we can still do it,” added Ronaldo.

It was the first meeting between Pirlo and Napoli coach Gennaro Gattuso, who won the 2006 World Cup together and spent a decade as AC Milan teammates, winning two Serie A titles and two Champions League crowns together.