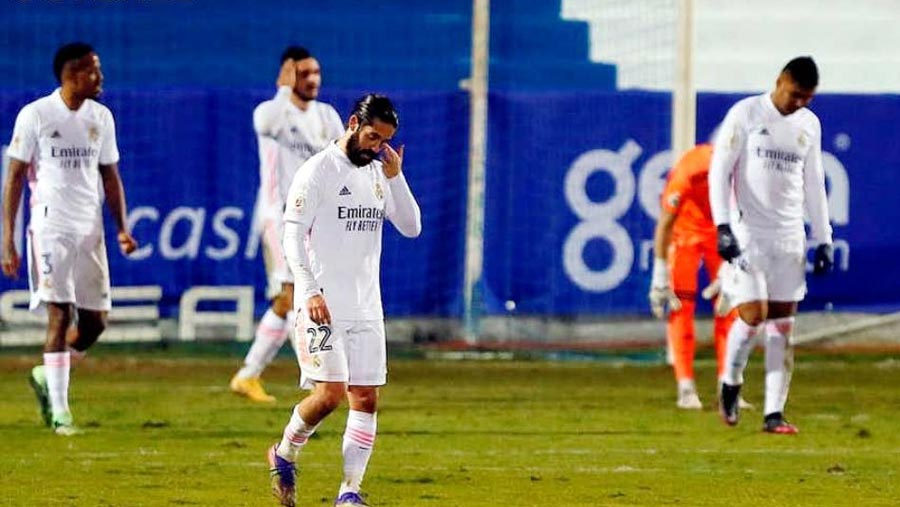 Third division club Alcoyano came from behind to eliminate Real Madrid 2-1 in the round of 32 of the Copa del Rey on Wednesday (Jan 20). The small club from eastern Spain scored in the 80th minute to force extra time and again in the 115th to make it to the last 16.

European giants Real Madrid were handed a humiliating Copa del Rey last-32 defeat by third division outfit Alcoyano – who were down to 10 men.

Zinedine Zidane's side took the lead through defender Eder Militao but Jose Solbes took the tie to extra time.

Alcoyano – who play in Segunda Division B – had Ramon Lopez sent off for a second booking but earned a famous win when Juanan stole in at the near post.

"I take responsibility and whatever has to happen will happen," Zidane said.

Club legend Zidane has won three Champions League titles as a manager but is under pressure, with his side four points behind La Liga leaders Atletico Madrid – who have two games in hand.

Real are 19-time winners of the Copa del Rey, but have not lifted it for seven years and have only won it twice since 1993.

Incredibly, this is the fifth time a team from the third tier has eliminated them since 2001.

Real were without captain Sergio Ramos – who is out of contract this summer and could leave the club after 16 years – as Zidane made nine changes from the team who lost to Athletic Bilbao in the Super Cup.