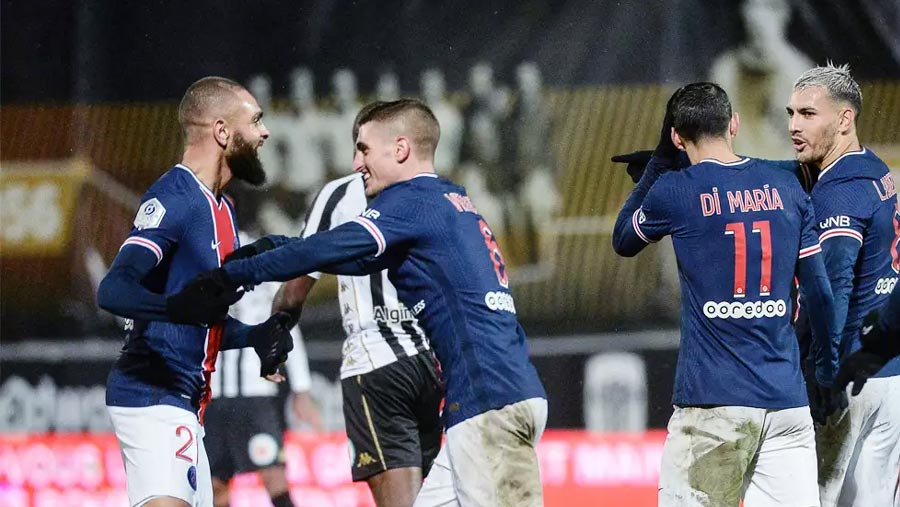 Layvin Kurzawa goal was enough for Paris Saint-Germain to beat Angers 1-0 on Saturday (Jan 16) and go top of Ligue 1 despite coach Mauricio Pochettino testing positive for Covid-19 before the game.

Kurzawa scored with 20 minutes left at the Stade Raymond Kopa to send PSG provisionally two points clear of Lyon, who will have the chance to reclaim first place when they host Metz on Sunday.

Assistants Jesus Perez and Miguel D'Agostino took charge of the PSG side with Pochettino having to self-isolate after the announcement on Friday that he had contracted the virus.

Neymar made his return to the starting line-up in Angers for the first time since suffering an ankle injury in a defeat to Lyon a month ago.

With Kylian Mbappe and Angel di Maria also starting behind Moise Kean in attack, it was a strong Parisian line-up but they appeared to play within themselves against an Angers side who sit seventh.

The home team even almost went ahead early in the second half when a Lois Diony diving header from close range was well saved by Keylor Navas.

Stephane Bahoken also saw an attempt deflected over before PSG broke through.

Alessandro Florenzi's cross from the right was inadvertently helped on by Angers defender Romain Thomas for Kurzawa, arriving from left-back, to score his first goal in almost a year with a first-time cushioned volley at the back post.

It was a third win in four games for PSG since former Spurs coach Pochettino was appointed two weeks ago.

He won his maiden trophy in midweek when the reigning Ligue 1 champions beat Marseille 2-1 to claim the Champions Trophy, the French equivalent of a Super Cup.