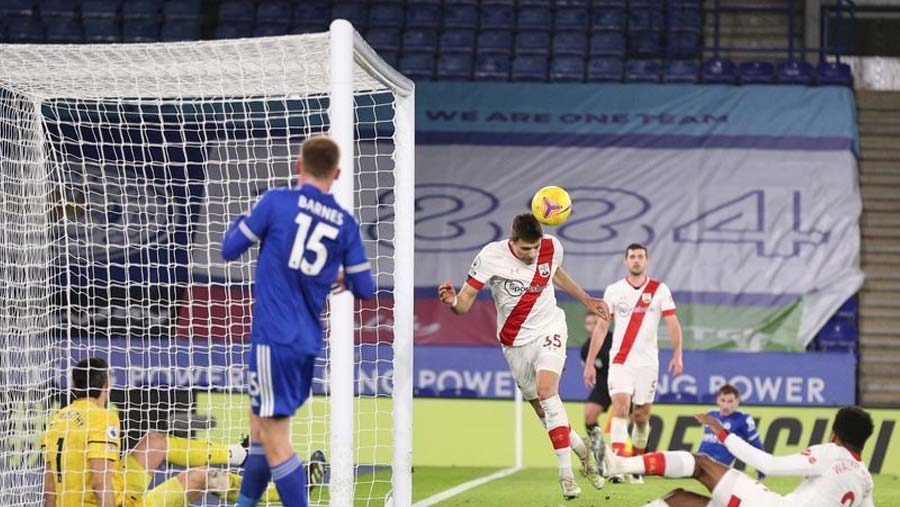 Leicester City showed they could have a big say in the Premier League title race with an impressive 2-0 win over Southampton to move above champions Liverpool into second spot on Saturday (Jan 16).

Leicester City climbed to second in the Premier League as they won a keenly contested encounter with fellow top-four hopefuls Southampton at King Power Stadium.

James Maddison fired in from a tight angle after 37 minutes, the Foxes midfielder instructing his team-mates to stand back as he performed a socially distanced celebration, before Harvey Barnes added a second deep into second-half stoppage-time.

Victory takes Leicester within one point of leaders Manchester United, who travel to third-placed Liverpool on Sunday, while Southampton are eighth, three points outside the top four.

The Saints dominated in the opening stages and created the first opening when Che Adams stretched the home defence on the counter-attack, while Leicester's Barnes' powerful drive forced Alex McCarthy into action with the game's first shot after 19 minutes.

The visitors, without talisman Danny Ings after the striker tested positive for Covid-19 last week, went close to a response through Ryan Bertrand and Will Smallbone either side of half-time but neither could find a way past Kasper Schmeichel.

In an entertaining conclusion, Stuart Armstrong rattled the Leicester crossbar with an excellent strike from the edge of the penalty area, while Jan Bednarek produced a superb goalline clearance to deny Barnes and the returning McCarthy saved from Jamie Vardy as both sides pushed for a late goal.

It took Leicester until the 95th minute to seal the three points, Barnes calmly slotting past McCarthy on the break.