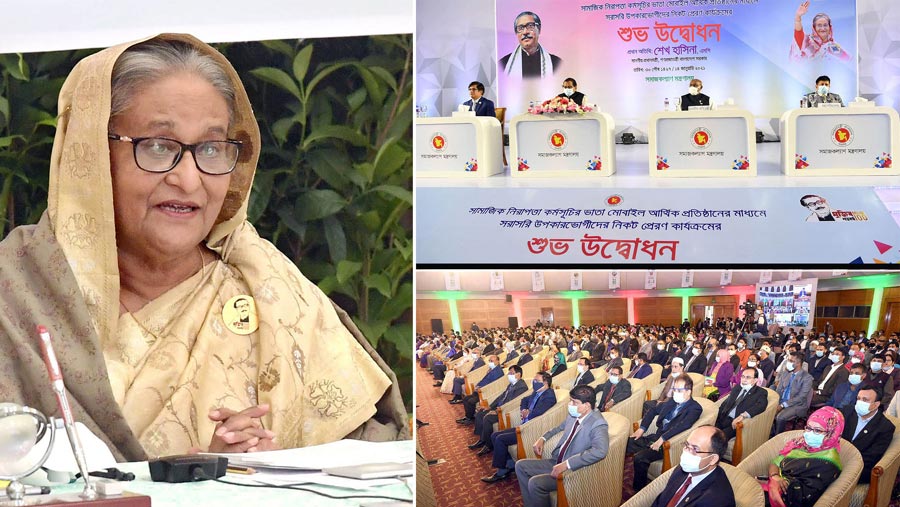 “We have been trying to send different allowances directly to the hands of the actual beneficiaries since long so nobody is there between the beneficiaries and they can use the money whatever they want,” she said.

Sheikh Hasina said the government wants the allowances being given to different segments of destitute people are reached their hands properly and the job is being done by the mobile financial service (MFS) operators – Nagad and bKash.

Mentioning that the Father of the Nation Bangabandhu Sheikh Mujibur Rahman had started different works for rural people such as rural social welfare activity to change the fate and livelihood of the people, the PM said they (Bangladesh Awami League) after coming to power have taken up the unfinished schemes of Bangabandhu and are working for their (rural people) welfare.

Deputy Commissioners of Chandpur, Pirojpur, Lalmonirhat and Netrokona districts were connected with the distribution ceremony where Members of the Parliament of local constituencies, Superintends of Police, Chairmen of Zila Parishads, Awami League leaders and officials concerned were present.

Beneficiaries also talked with the Prime Minister and expressed their gratitude to her for the allowances.

They thanked the PM for sending the allowances to their mobile wallets and said it would facilitate them to spend the money easily to fulfill their necessities.

Sheikh Hasina recalling her captivity during the then caretaker government in 2007 said she had drafted a plan for the development of the country and welfare of the people such as self-reliance in food production, sanitation, literacy rate, health services etc and formulated the electoral manifesto titled “Charter of Change” in 2008 along with other agendas after her release from the jail.

She said they have fixed a goal to eliminate poverty and hunger from the country within 2021 as the people voted Awami League for three consecutive tenures that helped the government to work for people and country by implementing different development projects.

“We are not government rather servant of people. We want to work as servant,” she said expressing her gratitude to the people to give mandate to her party Awami League for long time.

Sheikh Hasina said the government is running development activities for the people due to this mandate, mentioning that electricity connection is being provided to the house of each people.

On the occasion of the Mujib Borsha and Golden Jubilee of country’s independence, she reiterated her government’s determination of providing house to each homeless person in the country. “Each landless and homeless people would get an address and the government is working to this end,” she added.

Alongside the 100 percent electricity connection in the Mujib Borsha, the premier said the government has also planted over 1 crore trees across the country which has to be continued.

She urged all to work for the development of the country, saying that not only the government alone but also people of all walks of life have to work together for a happy and prosperous Bangladesh.

The head of the government also requested all to provide information of the people in their respective areas if anyone remains homeless. She also called upon the affluent section of the society to come up with their assistance to the destitute and homeless people.

Referring to her government’s initiative of introducing old age allowance, she said they have introduced the allowance keeping in mind that nobody becomes dependent on it rather the people who get allowance would also do work not sitting idle at home.

The amount of allowances has been raised to Tk 500 from the initial Tk 100 along with increasing the number of beneficiaries, she added.

Sheikh Hasina said the government has taken this safety net measure from the responsibilities of state so no people of the country treat themselves as worthless.

Mentioning different initiatives for the welfare of people, especially for women taken by her government in 1996, she said BNP after assuming office had stopped those such as community clinics, Amar Bari Amar Khamar etc schemes. After coming to power in 2009, she said the government has resumed the development and welfare initiatives.

The premier also highlighted the activities of government such as making mobile phone available for all from the monopoly during the then BNP government, digital phones, digital Bangladesh, own satellite – Bangabandhu Satellite-1, optical fiber, availability of broadband internet etc.