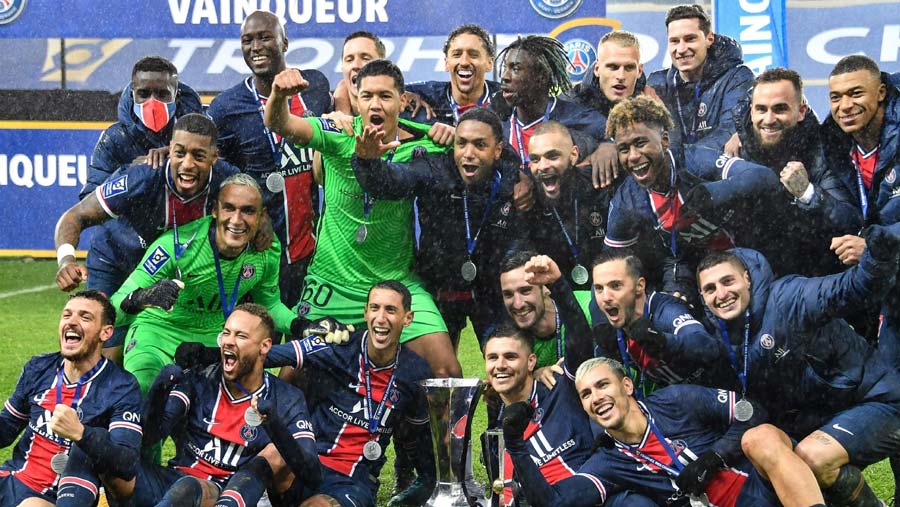 Neymar scored on his return from injury as Paris Saint-Germain beat Marseille 2-1 to win the French Super Cup in Lens on Wednesday (Jan 13). Brazil forward Neymar, who had been out of action since mid-December with an ankle injury, netted from the penalty spot in the second half to add to Mauro Icardi's first-half opener. Neymar replaced Angel Di Maria in the 65th minute for his first appearance in 2021.
Superstar Neymar scored on his return to action for Paris Saint-Germain as they beat arch rivals Marseille 2-1 to win this season's Champions Trophy. The Brazilian rolled home an 85th minute penalty to put PSG two goals ahead following Mauro Icardi's first-half opener to give new coach Mauricio Pochettino the first trophy of his reign in the French capital, and managerial career.

"I hope to win more titles, but the first will always be special," said Pochettino.

"We deserved this victory, we payed a good match."

The Champions Trophy is the French equivalent of a Super Cup, usually contested at the start of the season by the league champions and French Cup winners.

With PSG winning both last season, Marseille had been selected as their opponents as the Ligue 1 runners-up. This season's edition was delayed because of the coronavirus pandemic.

Hopes were high for a feisty tussle in Lens after Marseille's league win at PSG in September ended with five red cards and Neymar accusing Marseille centre back Alvaro Gonzalez of racism in the aftermath.

However it was a largely tame encounter in northern France, with the most noteworthy incident being substitute Neymar's goalscoring return after a month away.

The 28-year-old hadn't featured for the French champions since being stretchered off with an ankle injury during a 1-0 defeat to current league leaders Lyon on Dec 13.

Icardi thought he had given PSG the lead with a 22nd minute tap-in, only to have the goal ruled out for offside after Kylian Mbappe strayed past Marseille's back line to collect Leandro Paredes' defence-splitting pass.

Seven minutes later it was Mbappe's turn to have a goal chalked off when he started his run too early to connect with a long pass from his captain Marquinhos.

Icardi finally put dominant PSG ahead six minutes before the break with a goal typical of his poacher's style, first meeting Angel Di Maria's raking long ball with a close-range header that Steven Mandanda pushed onto the post.

The Argentine was quickest to follow up as the ball dribbled back out from the goal, and he tapped in his second goal is as many games since returning from injury.

He almost doubled his side's lead in first half stoppage time when he hit a left-footed strike back off the crossbar.

Neymar returned to action in the 65th minute and was immediately targeted by Gonzalez, the Argentine fouling the superstar attacker several times in what looked like a continuation of the pair's spat.

However it was Neymar who had the last laugh when he stepped up to score the decisive second goal for PSG from the penalty spot after Icardi was brought down by Marseille's substitute keeper Yohann Pele.

Dimitri Payet pulled one back for Marseille with a minute remaining but it was too little too late for Andre Villas-Boas' men.