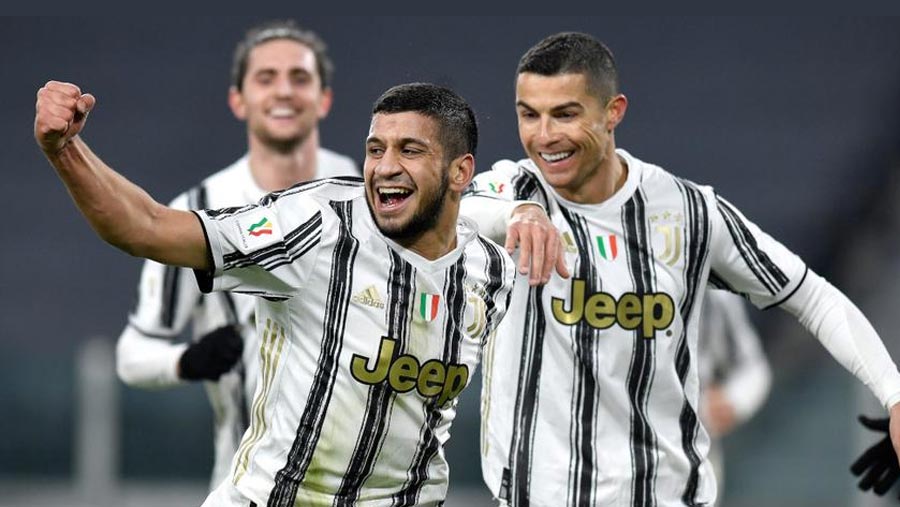 Tunisian midfielder Hamza Rafia came off the bench to score an extra-time winner on his debut as Juventus battled past Genoa 3-2 to reach the Italian Cup quarter-finals on Wednesday (Jan 13).

Rafia, 21, came on with quarter of an hour to go in regular time and scored his first Juventus goal after 105 minutes in Turin.

Andrea Pirlo's side had let a two-goal advantage slip to allow Genoa back into the game.

"Had we made the most of all the opportunities we had in the first half we would have avoided complicating our lives," said Pirlo.

"We could have managed the double advantage better to avoid extra time and save some strength for Inter (this weekend).

"But I'm satisfied, there were many lads on the pitch for the first time so there may have been some lapses."

Chiellini set up Dejan Kulusevski to open the scoring after two minutes in the Allianz Stadium.

Kulusevski then sent through for Morata to double their tally after 23 minutes.

Filippo Melegoni curled in the equaliser from outside the box, beating veteran keeper Gianluigi Buffon with quarter of an hour to go.

Ronaldo came off the bench with two minutes to go in regular time.

The Portuguese forward had a role in the winner, sending Morata through to tee up Rafia with Brazilian Arthur saving Juventus by heading off the line three minutes later.

Juventus, the record 13-time winners, next meet either Sassuolo or SPAL.

Romelu Lukaku headed in an extra-time winner as Inter Milan set up a quarter-final clash with city rivals AC Milan with a 2-1 win over Fiorentina.

Holders Napoli advanced with a hard-fought 3-2 win over Serie B leaders Empoli.

Arturo Vidal had given Inter the advantage five minutes before the break in normal time after a VAR review judged Terracciano to have fouled Alexis Sanchez.

The Chilean slotted in his first goal this season from the penalty spot.

But Christian Kouame blasted in a superb equaliser 12 minutes after half-time to take the match to extra-time.

Lukaku came off the bench on 69 minutes and with a minute to go ensured Inter avoided going to a penalty shootout with his 17th goal this season in all competitions.

"It was important to qualify," said coach Antonio Conte days before Inter host champions Juventus in Serie A.

"This result will give us a boost. We'll now measure our ambitions against Juventus."

AC Milan won 5-4 on penalities on Tuesday after their match against Torino ended 0-0 after extra time.

In Naples, Andrea Petagna scored the winner off a rebound with quarter of an hour to go after Nedim Bajrami had twice pulled Empoli level.

Giovanni Di Lorenzo headed in a Hirving Lozano cross after 18 minutes, with the Mexican scoring the second seven minutes before the break.

Napoli next play either Roma or Spezia.