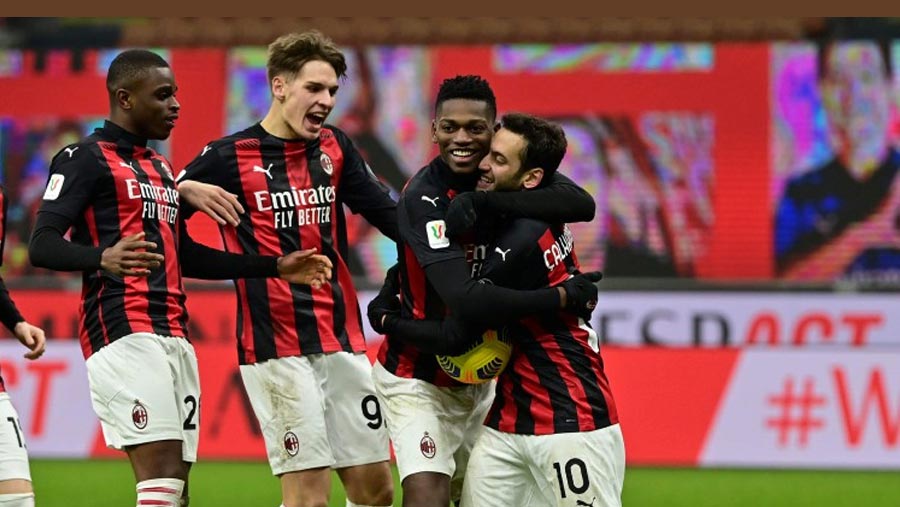 Zlatan Ibrahimovic got his first start in over seven weeks but AC Milan had to battle into the Italian Cup quarter-finals with a 5-4 win on penalties over Torino after Tuesday’s (Jan 12) match ended 0-0 after extra time. Hakan Calhanoglu slotted in the winning penalty with Tomas Rincon missing from the spot for Torino in the San Siro after a stalemate following 120 minutes of play.

“It was a very hard battle, but Milan never gave up, we were a team for 120 minutes,” said coach Stefano Pioli.

Ibrahimovic had made a brief late appearance last weekend in a 2-0 win over Torino in Serie A, having been sidelined with a left thigh injury since scoring a double against Napoli on Nov 22.

“I wanted to give Ibra a longer time after his return to the championship,” continued Pioli, whose side are top of the Serie A standings.

“He played a good match and this will help him find the best condition.”

On Tuesday, the 38-year-old Swede played the first half before being substituted off for Calhanoglu.

Ex-Milan coach Marco Giampaolo’s Torino gave the hosts more of a battle than last Saturday, with both sides missing chances in a clash between two former five-time former winners.

Ciprian Tatarusanu was in the Milan goal in place of Gianluigi Donnarumma with defender Mateo Musacchio playing for the first time in nearly a year.

Tatarusanu did well to deny Simone Zaza and Amer Gojak, while Torino counterpart Vanja Milinkovic-Savic kept out Rafael Leao and Davide Calabria from a distance.

Milan’s Brahim Diaz had the best chance to finish off the game four minutes from time, but the Spanish forward sent over the bar on front of goal.

On the bench, Donnarumma even picked up a red card for protesting a penalty was not awarded for a clumsy Milinkovic-Savic intervention on Leao with 20 minutes to go.

But replacement Tatarusanu proved solid as Milan next meet either city rivals Inter or Fiorentina in the last eight.

Title-holders Napoli are at home against Empoli on Wednesday with record 13-time winners Juventus taking on Genoa, who lifted the trophy once in 1937, in Turin.