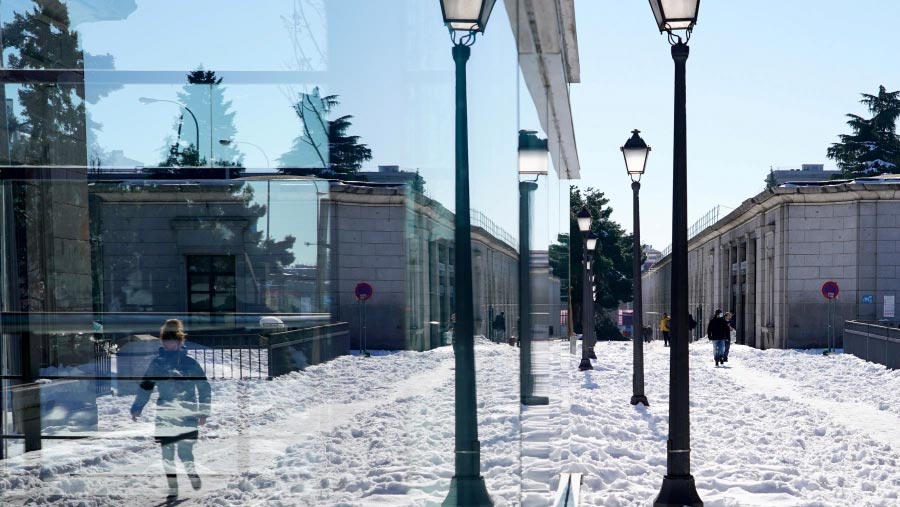 Armed with picks and shovels, Madrid residents on Monday (Jan 11) slowly shovelled out of Spain’s worst snowstorm in decades, which has turned roads and pavements into skating rinks. Officials asked people to stay at home if possible after Storm Filomena dumped 20-30 centimetres (7-8 inches) of snow on the capital between Friday and Saturday.

Emergency services workers and soldiers freed 2,500 drivers trapped in their vehicles by the storm, which killed at least three people.

Lacking enough salt and snowploughs, the authorities had as of Monday only managed to clear main roads of snow and fallen tree branches. Residents pitched in to help municipal workers and soldiers remove snow from the streets.

“The situation is so hard that we wanted to help,” said Blanca Fernandez, a 39-year-old optician’s employee, as she cleared a sidewalk with a borrowed shovel.

Authorities are worried about the prospect of snow turning to ice, with temperatures expected to fall to minus 13 (9 Fahrenheit) in the centre of Spain on Tuesday.

“We are still facing difficult days – it will not be easy to return to normality,” Interior Minister Fernando Grande-Marlaska told a news conference.

He insisted the travel chaos will not affect the distribution of the coronavirus vaccine, with 350,000 doses due to be rolled out nationwide on Monday.

“The delays – if there are delays – will be minimal and slight,” the minister said.

The distribution of the jabs to all regions was “guaranteed”, he added.

At Madrid airport, which had been closed most of the weekend, the first flights resumed late on Sunday after the army cleared snow from the runways.

The rare snowstorm triggered some unprecedented scenes over the weekend in Madrid.

People skied along the city’s main commercial street, the Gran Via, and held massive snowball fights despite pandemic restrictions on the size of groups that can meet in public.

One man was filmed being pulled on a sled by dogs, while others celebrated the snow by singing and dancing a conga line in the central Puerta del Sol square.

But on Monday residents largely heeded the government’s call to stay at home. The streets were quiet, except for the sound of shovels scraping snow and ice.

Shoe store owner Gabriel Madrid said he feared he would not receive more merchandise “until Friday”.

The Madrid region, which is dealing with its heaviest snow since 1971, announced all schools would be closed until Jan 18. Libraries, museums and the courts will all remain closed until Wednesday.

Madrid’s regional government has distributed 277 tonnes of salt to municipalities in a bid to prevent dangerous ice from forming, with another 3,500 tonnes due from eastern Spain in the coming days.

A total of 116 roads across Spain remained closed Monday evening and nearly 600 were still facing restrictions on their use due to the storm, according to the interior ministry.

Bus services were cancelled on Monday but the Madrid metro operated around the clock so that essential workers could get to their jobs.

Four stations were providing shelter, food and blankets to the homeless.

Rail links were have also slowly been re-established, with the departure Monday afternoon of the first high-speed train between Madrid and Barcelona since the storm hit.