Bangabandhu’s Jan 10 speech has all guidelines to run an independent state: PM 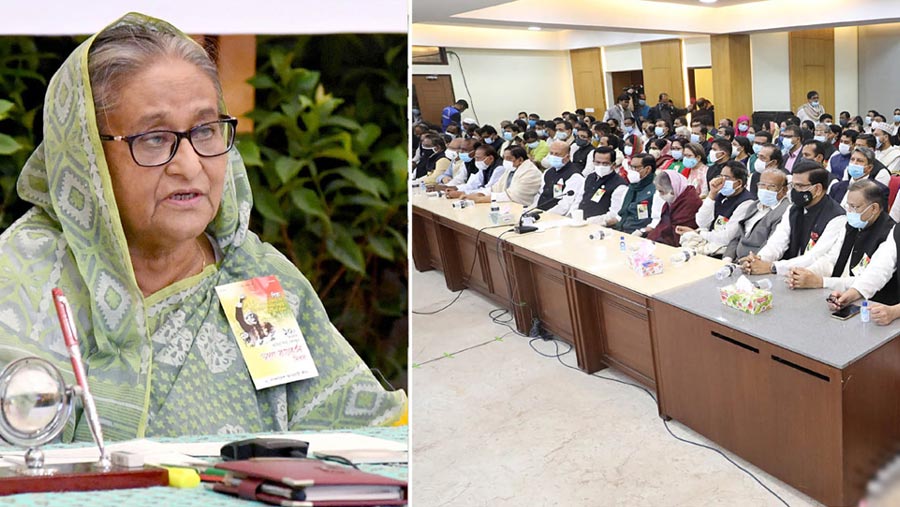 “The January 10, 1972 speech of Bangabandhu at the Racecourse Maidan on his return to the country from Pakistani captivity has all the required guidelines to run an independent state. There was no written speech in his (Bangabandu’s) hand. Whatever he said he uttered from his heart,” she said.

She said this while presiding over a discussion meeting virtually from her official Ganabhaban residence here marking the historic Homecoming Day of Father of the Nation Bangabandhu Sheikh Mujibur Rahman. The Awami League organized the meeting from the party’s central office at Bangabandhu Avenue in the capital, local media reported.

On this day (Jan 10) in 1972, Bangabandhu, the undisputed leader of the nation and supreme commander of the country’s Liberation War, returned to the sacred soil of independent Bangladesh from London en via New Delhi after 290 days of captivity in Pakistan jail.

The PM called upon all her party leaders and activists, particularly the new generation, to rehear the speech of Jan 10 alongside the Historic Mar 7, 1971 address of Father of the Nation Bangabandhu Sheikh Mujibur Rahman.

In this connection, she said, “You will get everything by rehearing the speeches such as getting inspiration in doing politics.”

The PM simultaneously urged all the people to follow the health guidelines, including wearing masks and sanitizing hands, to protect themselves and thus others from the coronavirus.

She also reminded all that Bangladesh was badly affected by the virus in March last year and this may repeat as the month of March is approaching.

Noting that her government has taken all the measures to bring coronavirus vaccines she said, “The vaccine will come InshaAllah. Despite the fact, we have to properly follow the health guidelines as we have been able to control the Covid-19 by maintaining the guidelines.”

The premier also suggested all to intake Vitamin C and D and other necessary foods to boost the immune system to fight the Coronavirus.

Sheikh Hasina, the eldest daughter of Bangabandhu, said as her father Sheikh Mujibur Rahman loved the people of Bangladesh so much, he straightly went to the historic Racecourse Maidan now SuhrawardiUdyan where thousands of hundreds of people gathered to see him after his return to Dhaka from London en-route New Delhion Jan 10, 1972.

To this end, she said, “How a person could hold as much love and commitment as Bangabandhu had towards the people and the country as well.”

In the homecoming speech, the Father of the Nation gave a guideline to run an independent state and its reflection was later surfaced in the country’s constitution formulated by Bangabandhu’s government, she said.

Alongside giving a guideline to run a state, Bangabandhu,in his speech, gave a description of Pakistani atrocities upon the Bangalees during the nine-month Liberation War in 1971 and extended heartfelt thanks to the countries particularly India for helping Bangladesh become an independent state.

The PM said that she has become astonished when she saw Bangabandhu did everything to run a state towards prosperity and development only in three and a half years after the Liberation War before his assassination along with most of his family members on Aug 15, 1975.

She said the anti-liberation elements, who want to foil the independence of Bangladesh as they do not want that people of the country will move around the world keeping their heads high, have become failed as Bangladesh has already reached a dignified position on the global stage.

Sheikh Hasina said her government has been tirelessly working to make beautiful the lives of the people for whom Bangabandhu had sacrificed his entire lifefor establishing the rights of people.

Following the footsteps of Father of the Nation, she said that her government has been implementing a perspective plan for making Bangladesh a prosperous and developed country by 2041, adding that they have even formulated a plan (Delta Plan-2100) to give the new generation a guideline to run the state towards prosperity.

The PM called the Awami League leaders and activists to devote themselves to build the country as a Shonar Bangla, saying, “Let’s take a vow to build a happy and prosperous Shonar Bangla free from hunger, poverty, communal chaos, militancy and terrorism on the Historic Day of Bangabandhu’s Homecoming.”

The PM reiterated her commitment to give accommodation to every homeless as well as landless people and illuminate every house with electricity as part of the move to materialize the dream of Father of the Nation to give the nation an improved life.