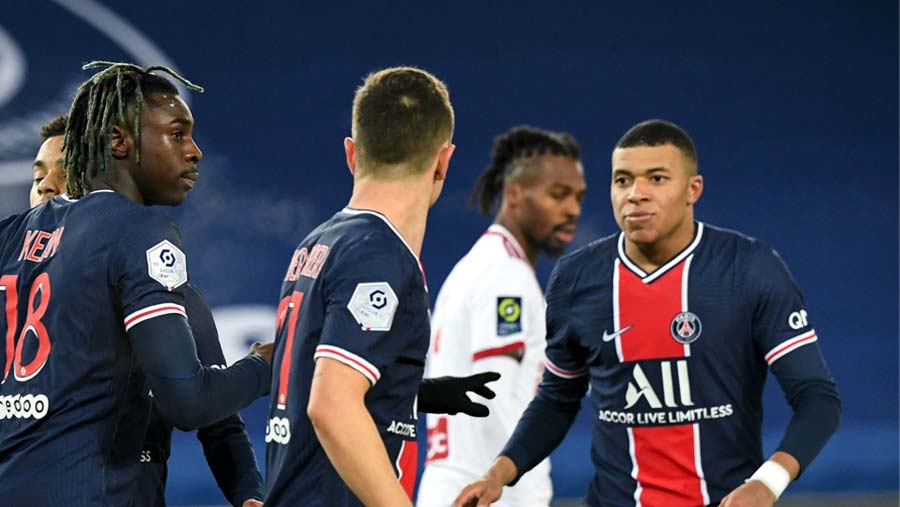 Mauricio Pochettino claimed his first win with Paris Saint-Germain as the French champions edged closer to the top of the Ligue 1 table by beating Stade Brestois 3-0 at home on Saturday (Jan 9).

PSG prevailed through goals by Moise Kean, Mauro Icardi and Pablo Sarabia to be on 39 points from 19 games, one point behind Lyon who salvaged a 2-2 draw at Stade Rennais.

Lille are third behind second-placed PSG on goal difference after Burak Yilmaz's goal earned them a 1-0 victory at bottom club Nimes.

Monaco moved up to fourth on 33 points with a 3-0 home victory against Angers.

Three days after a lacklustre performance during a 1-1 draw at St Etienne in Pochettino's debut, PSG failed to impress again but at least bagged three points at the Parc des Princes.

Marquinhos's header bounced off the post and into the path of Italy forward Kean, who tapped in for his ninth goal in 13 league games.

It took a quick save from Gautier Larsonneur to deny Marquinhos shortly afterwards as PSG kept the pressure on, although the home side were far from convincing and left it late to wrap it up.

Icardi doubled the tally nine minutes from time with a cool finish from Kylian Mbappe's pass, before Sarabia added the third two minutes later with a crossed shot.

A late fightback earned Lyon a point at fifth-placed Rennes.

Former Lyon midfielder Clement Grenier put the hosts ahead after 20 minutes with a deft strike from just inside the area.

Benjamin Bourigeaud made it 2-0 on 56 minutes from close range but Memphis Depay's superb volley gave the visitors some hope in the 79th minute.

Jason Denayer equalised as he latched onto Depay's cross with eight minutes remaining.