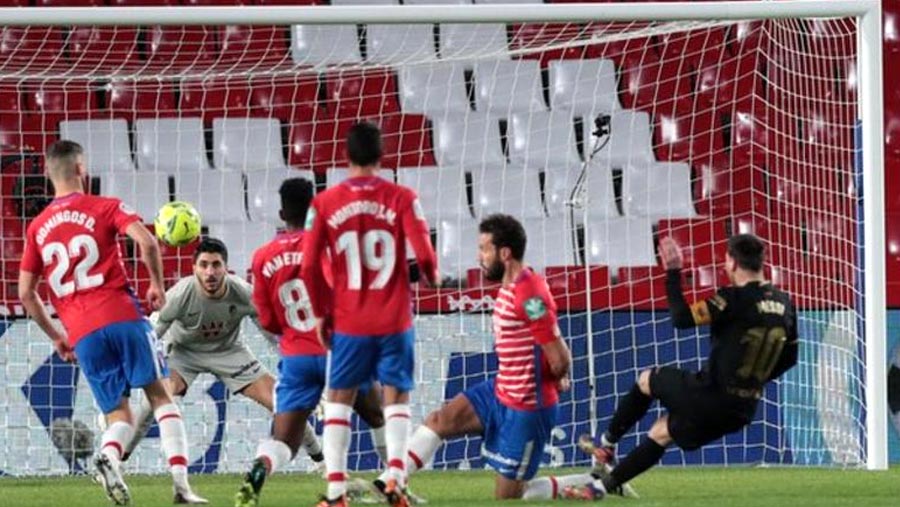 Lionel Messi is back in form and F.C. Barcelona are finding their feet after a 4-0 demolition of Granada on Saturday (Jan 9) put them within four points of the top of La Liga. Messi scored twice to make it four goals in three matches since the turn of the year and his resurgence has coincided with an upturn for the team too, this victory Barca’s third on the bounce. It puts them in sight of league leaders Atletico Madrid, even if Diego Simeone’s side now have three games in hand. Atletico’s match against Athletic Bilbao earlier on Saturday was postponed due to the snowstorm that has engulfed Spain this weekend.

Barcelona extended their unbeaten run to eight league matches as Lionel Messi and Antoine Griezmann both struck twice in a dominant win at Granada.

Griezmann's opener was initially ruled offside, but it was decided a pass had deflected to him off a Granada player.

Messi fired into the top corner from 18 yards and then cleverly fizzed home a low free-kick to move him top of La Liga's scoring charts on 11 goals.

After the break, Griezmann struck again and Granada had Jesus Vallejo sent off.

Vallejo caught Martin Braithwaite and was dismissed for a professional foul with 12 minutes remaining of what proved a testing night for the seventh-placed hosts.

They did go close early on when Roberto Soldado forced Marc-Andre ter Stegen into a fine save, but Barca's attacking talents quickly built on their keeper's crucial intervention.

After Griezmann's controversial opener, Messi looked razor sharp in adding a second, and his free-kick three minutes before the break was clinical and cheeky as the Argentina forward chose not to take on the wall but instead beat Granada keeper Rui Silva on the side of the goal he was protecting.

Frenchman Griezmann showed quality with a sharp touch and finish for the fourth - the first time he has scored twice in a Spanish top-flight game for Barcelona since his home debut in August 2019.

Just over a month on from a defeat at Cadiz which left them closer to the relegation zone than the Champions League places, Ronald Koeman's side have now moved to within four points of top spot in the table.

Leaders Atletico Madrid have three games in hand, but this was a fourth away win in a row for Barcelona and Messi's fourth goal in two outings.