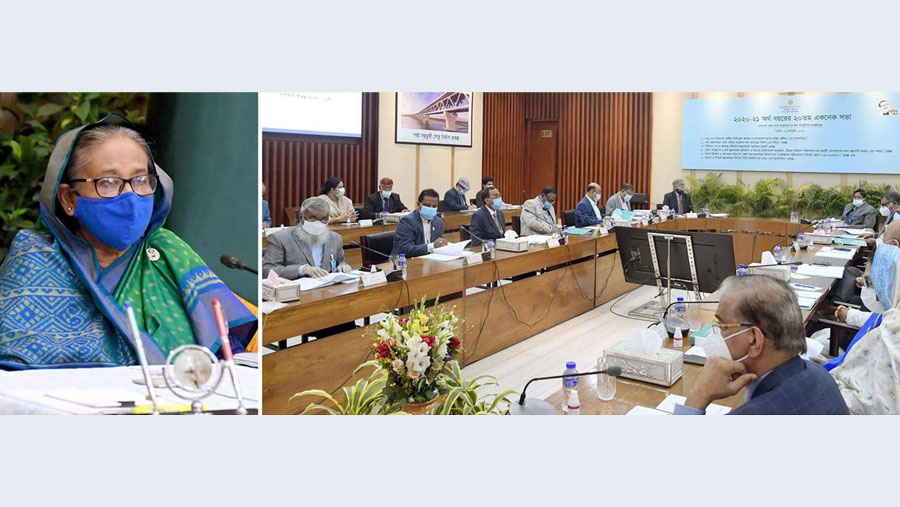 The Executive Committee of the National Economic Council (ECNEC) on Tuesday (Jan 5) approved the 1st revision of the Covid-19 Emergency Response and Pandemic Preparedness Project with an additional cost of Tk 5,659.07 crore in a bid to mainly procure, preserve and distribute Covid-19 vaccines to rein in the spread of this deadly virus.

The approval came from the 20th ECNEC meeting of the current fiscal year (FY21) held with ECNEC Chairperson and Prime Minister Sheikh Hasina in the chair.

The premier Chaired the meeting virtually from her official Ganobhaban residence while ministers, state ministers and secretaries concerned joined it from the NEC Conference Room in the city’s Sher-e-Bangla Nagar area.

“Of the total project cost, Taka 3,867.58 crore will come from the government of Bangladesh while the rest Tk 5,701.65 crore as project assistance,” he added.

Of the approved six projects, three are new while three others are revised projects.

Revealing the details of the project on Covid-19, Planning Commission member Abul Kalam Azad said apart from procuring, preserving and distributing Covid-19 vaccines, the other major project operations include installing modern microbiology laboratories alongside PCR machines at 27 medical college and hospitals in the country.

Besides, RT-PCR kits, antigen kits and health safety kits will also be procured under the project side by side Biosafety Level-3 Labs will be set up at IEDCR and Bangladesh Institute of Tropical and Infectious Diseases (BITID), Chattogram.

Azad informed that 10-bed Intensive Care Unit (ICU) and 20-bed Isolation Units would be set up at 43 district Sadar hospitals.

Azad informed that the World Bank would provide $500 million while the AIIB $100 million for implementing the project.

The Planning Commission member said the government aims to give Covid-19 vaccines to around 13.76 crore people of the country. But, the people aged below 18 would not be brought under the vaccination programme except certain reasons.

He said the government would spend around Tk 4,236.43 crore for procuring, transporting, distributing Covid-19 vaccines while the frontline workers including health workers, personnel of Law Enforcement Agencies, media personnel would get the vaccines on priority basis.

The Planning Commission member said the initial cost of the project was Tk 1,127 crore when it was approved in April last year while the Directorate General of Health Services (DGHS) as the executing agency has so far spent Tk 115 crore.

The planning minister said Prime Minister Sheikh Hasina herself give utmost priority to the issue of successfully handling the Covid-19 crisis.

“We’ve sufficient fund supply... the arrangements for storing of vaccines at district and upazila levels have also been ensured. We’re ready and we believe that we’ll get the vaccines on time,” he added.

The planning minister also mentioned that round the clock monitoring would be ensured so that there is no mismanagement over the price of vaccines.

Referring to the Kushtia Medical College and Hospital (2nd revised) project, which was placed before the meeting today, Mannan said the project was not approved as its progress was not satisfactory.

The planning minister said the Prime Minister expressed her dissatisfaction over the delay in implementation of the project as it had started back in 2012 and a proposal was made for extending its timeframe until 2023.

He said the premier has directed the IMED to inspect the project site and submit a report after thorough inspection and investigation about the reasons for delay in implementation.

The Department of Disaster Management under the Ministry of Disaster Management and Relief will implement the project titled “Procurement of equipment for conducting search, rescue operations and establishing emergency communication during earthquake and other disasters (3rd phase)” with an estimated cost of Tk 2,275.99 crore.

The project area covers the whole of Bangladesh including the priority areas of Dhaka, Chattogram, Sylhet and Rangpur Divisions. The project is expected to be completed by October 2023.

The project aims to procure modern equipment to make quick response and thus conduct emergency rescue operations during and after the possible disasters.

Planning Commission member Md Zakir Hossain Akand said this project is very much important considering the disaster-prone nature of the country while modern rescue equipments would be provided to 10 government agencies and organizations so that they could make quick response if any disaster happens.