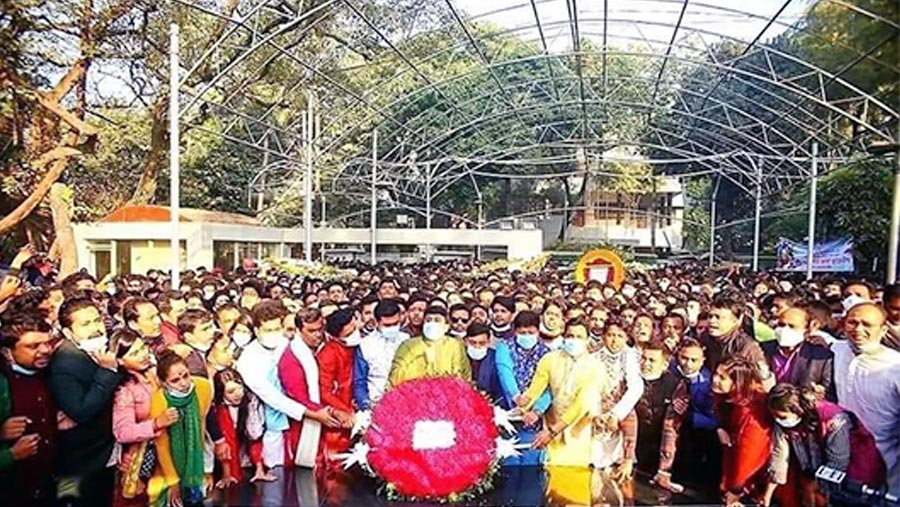 Father of the Nation Bangabandhu Sheikh Mujibur Rahman established the students’ wing with a view to attaining the country’s independence.

The week-long celebration was commenced on Monday with hoisting of national and party flags at party offices at 7:00 a.m. and placing of wreaths at the portrait of Bangabandhu at Dhanmondi road-32 residence at 8:00 a.m.

After cutting a cake at Dhaka University Curzon Hall around 10:00 a.m., BCL organised a discussion at Krishibid Institution Bangladesh (KIB) at 3:30 p.m. with the presence of Prime Minister, also president of Awami League Sheikh Hasina, as the chief guest.

While addressing the discussion, BCL president Al Nahian Khan Joy said bringing an end to the practice of unhealthy student politics, introduced by Ziaur Rahman by handing over arms to Jatiotabadi Chhatra Dal men instead of books, BCL is working relentlessly and practicing healthy politics in line with its earlier pride history for the betterment of the country.

A delegation, consisting of some leaders of central executive committee, paid reach tribute to Father of the Nation Bangabandhu Sheikh Mujibur Rahman by placing wreath at his graveyard at Tungipara and offered doa around 10am.

This week long celebration programmes include a voluntary blood donation campaign to be held on Jan 8 around 10:00 a.m. at Bottola beside Aparajeyo Bangla on DU campus, while educational stuff would be distributed among students on Jan 7 at 10:00 a.m.

Marking the anniversary, winter clothes and health protection equipment will be distributed among destitute people on Jan 6 at 11 a.m. in front of Swoparjito Swadhinota Sculpture on Dhaka university campus.

The BCL was also engaged in the movement launched by Sheikh Hasina against the ‘state terrorism’ unleashed by the then BNP-Jamaat alliance government after the 2001 polls.

The BCL also waged a strong movement after the 1/11 changeover when the army-backed government arrested Sheikh Hasina on Jul 16 in 2007 without any reason.

Now the BCL is working relentlessly for building a digital Bangladesh.