Get prepared through education: PM to BCL 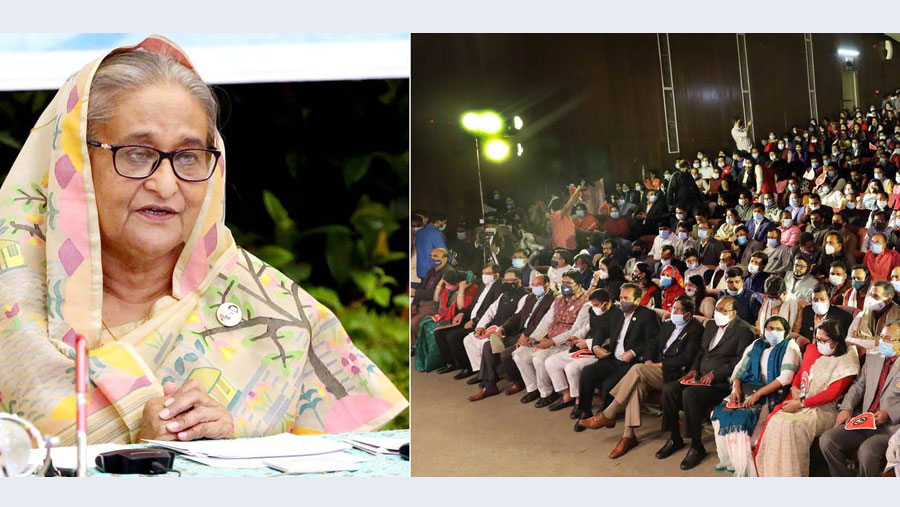 Noting that no nation can move forward without education, Prime Minister Sheikh Hasina on Monday (Jan 4) asked the leaders and activists of Bangladesh Chhatra League (BCL) to get involved in nation building preparing themselves with the organisation’s main principles.

“BCL’s main principles are education, peace and progressiveness. Each BCL leader and activist has to move ahead bearing the ideology... We will move towards progressiveness following the path of peace and pull the country ahead and it should be our goal,” she said.

The premier was addressing a discussion at Krishibid Institution auditorium marking the 73rd founding anniversary of BCL as the chief guest virtually from her official residence Ganabhaban in Dhaka, local media reported.

Mentioning that she has taught her children that education and knowledge are such a wealth which always helps everyone move ahead smoothly, Sheikh Hasina urged BCL leaders and activists to prepare themselves with this lesson.

“... You (BCL leaders and activists) can attain huge wealth but never contribute to people and the nation if you prepare yourself without ideology. Nobody can be a high-up without containing the ideology,” she noted.

The premier went on saying the Covid-19 has shown the reality that wealth and properties have become failed when it was most required. “So, you (BCL) should put concentration on education.”

On the occasion of the BCL’s founding anniversary, the PM cut a cake at Ganabhaban while present and former leaders of BCL also cut cake at Krishibid Institution auditorium. A short video on the evolution, journey and activities of BCL was screened at the discussion meeting.

Sheikh Hasina asked BCL leaders and activists to build themselves being imbued with the ideology of Bangabandhu.

Mentioning that the main thing for any political person is to keep up ideology, she said “Anything is possible to achieve if anyone remains determined to uphold honesty and ideology and Father of the Nation Bangabandhu Sheikh Mujibur Rahman has shown it.”

Sheikh Hasina, the chief patron of BCL, asked the leaders and activists of the organisation to inherit the ideology and patriotism from Father of the Nation.

“BCL is one of the oldest organisations in the subcontinent and you (BCL leaders and activists) make it stronger,” she added.

Sheikh Hasina asked the BCL leaders and activists to read the Oshomapto Attojiboni (The Unfinished Memoirs), Karagarer Rojnamcha (The Prison Diary), Amar Dekha Naya Chin (The New China as I Saw) and Secret Documents of Intelligent Branch on the Father of the Nation.

She urged the students to read more books apart from the textbooks during the Coronavirus pandemic to enrich their knowledge.

Referring to the second wave of Covid-19, the premier said when the government was taking preparation to reopen the school-college the deadly virus hit the country again and that is why they are continuing academic activities through Sangsad TV and online classes.

Highlighting different measures taken by the government to diversify the education, she said they have established medical, maritime, civil aviation, textile universities and special attention has been given on technology and vocational education in the country.

She said the government has set up 16 universities in different districts and works for establishing more universities are going on.

“We have planned to establish university in each district... If possible private universities would also be set up there,” she added.

The PM mentioned her government’s endeavor to further boost up agriculture and industrialization as well as economic zones to generate more employment so nobody is remained unemployed.

Regarding the Covid-19, she directed all to follow the health guidelines and wear face mask to protect themselves from the virus.

She said the government is doing whatever needed to keep country’s economy running.

“There may be famine across the globe due to the coronavirus. To avert famine in Bangladesh, it should be ensured that not a single inch of arable land is left empty,” she said.

In this connection, the premier put emphasis on the optimum utilization of the arable land.