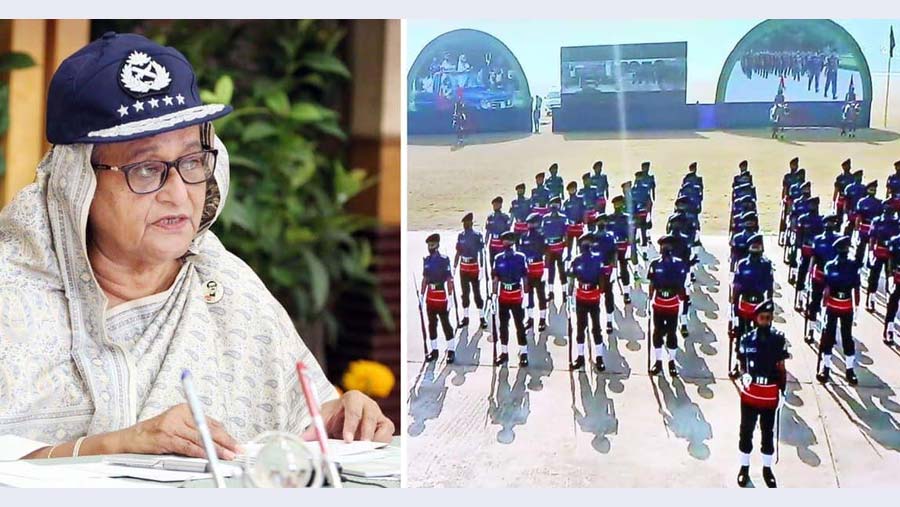 “The most important thing is that the trend of crimes is changing with the advent of newer technologies as it is an era of technology. Cybercrimes are increasing drastically and we have to prevent it,” she said.

While addressing virtually the passing-out parade of the 37th BCS batch of assistant superintendents of police (ASPs) from her official Ganabhaban residence in Dhaka, the PM also said that the crimes which are being committed using technology must be stopped.

The premier called upon the police personnel to always serve the people with honesty, dedication, moral values and discipline and thus achieve the trust, confidence and love of the people.

“In case of discharging professional duties, the police personnel have to give utmost priority to the people’s fundamental rights, human rights and the rule of law,” she said.

Noting that money laundering, cybercrime and human trafficking have global phenomenon, Sheikh Hasina said, “We have to protect our country from the menaces.”

She asked the police personnel to prevent the repression on the women and children with more efficiency alongside stopping other social crimes such as spreading rumours and gangster culture.

“We have to bring to normal life the teenagers who are involved in crimes using various apps,” she said.

The PM asked the police personnel to stay alert so that none could spread rumour to destabilize the country.

Bangladesh Police arranged a spectacular parade marking the occasion which the premier witnessed virtually from the Ganabhaban.

The PM said that her government’s topmost priority is to ensure peace and security of the people by strengthening democracy.

In this connection, the premier said, quoting Bangabandhu, “Bear in mind that the people will love you instead of fearing. You know, people love police in many countries. You have to learn how to earn honour.”

Briefly highlighting various measures taken by her government for the overall development of police, Sheikh Hasina said her government has formed, Anti-Terrorism Unit and Counter Terrorism and Transnational Crimes (CTTC) Unit to enhance efficiency of the police personnel in containing the terrorism and militancy.

Besides, the government has established Special Security and Protection Battalion, Police Bureau of Investigation (PBI), Tourist Police, Naval Police and Industrial Police to effectively fight all sorts of crimes, she continued.

Sheikh Hasina said that the budget for police was only Tk 850 crore when her party Awami League assumed office in 1996, adding that the government increased the amount to Tk 1,200 crore in its first budget.

The premier said she herself as the head of the government has established a 10-storey hospital for police at Rajarbagh Police Lines after coming to power in 1996 and stressed the need of forming a separate medical unit for ensuring medicare services for the police.

She said that her government has rented a private hospital for giving proper treatment to the policemen infected with the Covid-19.

Sheikh Hasina also said her government has been taking measures to establish educational institutes in the divisional cities for ensuring proper education for the children of the police personnel.

She greeted the police personnel for playing an effective role to help the people particularly in reaching food at night to the doorsteps of those who couldn’t want assistance in broad day light and arrange burial of those who died of Covid-19 during the coronavirus pandemic.

The PM said that the police have to play a great role in establishing a developed and prosperous country free from poverty, hunger and religious disharmony as envisioned by Father of the Nation Bangabandhu Sheikh Mujibur Rahman.