Students happy getting textbooks at beginning of New Year 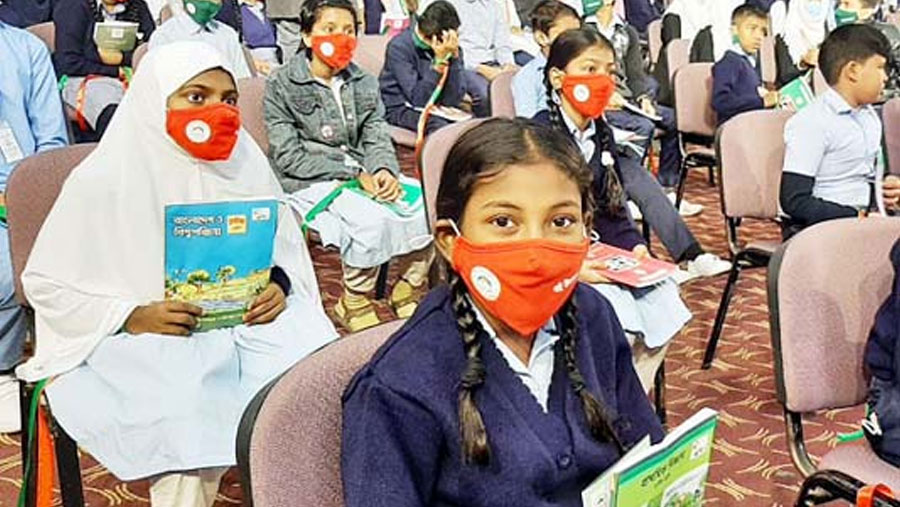 Like every year, free textbooks have been handed over to the students in the academic year 2021 as the textbook distribution started all over the country including the capital on Friday (Jan 1). The book distribution process started from 9.30 a.m. and continued till 4 p.m.

The students wearing masks on their faces, entered the school grounds maintaining proper health rules and stood in a disciplined queue at a distance of three feet so that they could receive books safely, local media reported.

Meanwhile, the class teachers sanitized the hands of the students prior to let them enter into the classrooms.

Sakina Mollik, an assistant teacher at Mirpur National (Afternoon) Government Primary School in the capital, told media that students arrived at school early in the morning with their parents to collect new books.

“About 85 percent of the students along with their parents received books from pre-primary to fifth grade”, she said.

Textbook distribution process may take a few days more this year as many students moved to village homes due to the ongoing pandemic, she said, adding that usually students get new books within one to two days if the educational institution is open.

Nasima Begum, a guardian of the same educational institution, said her daughter is a fifth grader student and her son is a second grader at that school.

Expressing satisfaction over the textbook distribution, she said that the school authority asked her several times to pick up books from school so that her children could study properly.

“Since the first day of the year was Friday, I thought the book distribution would not be held,” she said, adding that but it has not happened.

“I am very happy to get the book today at the right time. Both boys and girls are happy to get new books,” she also expressed happiness over textbook distribution.

Md Monirul Islam, headmaster of 139 Number Pasharibunia Shikdar Hat Government Primary School of Pirojpur district, told media that the parents of the students were informed, dialing their mobile phones, about the time allotted for each class of students for book distribution.

“From 9 a.m. (including prayers and eating break) to 4 p.m., about 98 percent of the students took new books while two percent of students were absent,” he said.

He said there was a dilemma between students and parents because of the coronavirus pandemic, whether there were any instructions for students to move on to the next class or not.

Meanwhile, the government has decided to distribute textbooks in a different format this year keeping in mind the health protection of students as educational institutions have been closed since last March due to the corona virus.

On Dec 29 last, a notification given on the website of Directorate of Secondary and Higher Education (DSHE) regarding the distribution of books to the students saying that free textbooks will be handed over to the students on Jan 1, 2021.

Three days will be given for distribution of books for each class.

Textbooks have to be distributed in four classes (6th to 9th grade) in 12 days.

The notification further said that the institution authorities must conduct the textbook distribution activities by ensuring the health protection of the students in accordance with the proper health rules.

Prime Minister Sheikh Hasina already inaugurated the free textbook distribution through a videoconferencing from her official residence Ganabhaban on Thursday.

Despite the coronavirus pandemic, the government has already taken all-out measures to distribute new textbooks among 4.5 crore students of the primary and secondary levels free of cost on the first day of the New Year.

The textbook this year, however, will not be distributed by holding book festivals like every year due to the coronavirus. The books will be distributed among the students at the respective educational institutions in 12 days to avoid any kind of gathering.

According to the Ministry of Primary and Mass Education, the demand of textbooks for primary students in 2021 is 10 crore 25 lakh 82 thousand and 555.

A total of 2,13,288 books printed in special language will be distributed to 94,275 ethnic students (Chakma, Marma, Tripura, Garo and Sadri) from pre-primary to third grade and the books have been printed in five languages.

This time Braille books will be distributed to 9,196 visually impaired students.

According to the Ministry of Education, in the academic year of 2021, 24 crore 33 lakh 34 thousand copies of books have been printed for the secondary level students.