PM for all preparation to defend country’s sovereignty 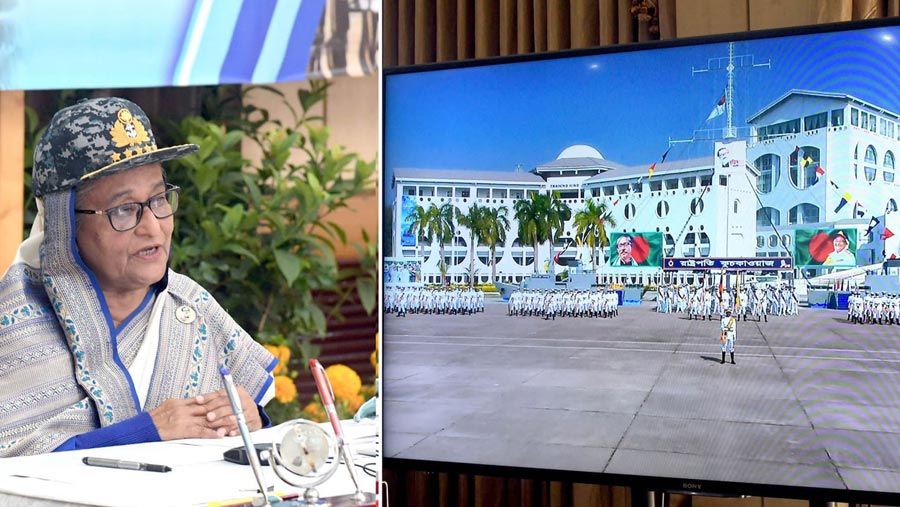 She was addressing virtually as the chief guest a function from her official Ganabhaban residence in Dhaka marking “President Parade (winter)-2020” of the passing out cadets of the Midshipman 2018 Alfa and Direct Entry Officer (DEO) 2020 Bravo. The Bangladesh Navy organized the function at the Bangladesh Naval Academy, Chattogram, local media reported.

The premier said her government would take every initiative necessary to protect the country’s independence and sovereignty to keep head high as an independent nation despite Bangladesh’s foreign policy is “Friendship to all, Malice to none.”

In this context, she said, “We want peace rather than war. But, we have to have all sorts of initiatives and training to safeguard the country’s sovereignty. We have been building all our forces keeping that in mind.”

The PM said she wants Bangladesh shipyards to build its own warships, adding her government has already taken measures to this end.

She also referred to handing over the Khulna Shipyards and dry-dockyards of Chattogram and Narayanganj to Bangladesh Navy in this regard.

Briefly spelling out the measures taken by her government for the advancement of the navy, she said, “We have already inducted 27 warships and two ultra-modern submarines to the Bangladesh navy to make it further stronger”.

The Bangladesh Navy has turned into a three-dimensional force with induction of the submarines, she added.

Besides, her government has taken measures including building Bangabandhu Complex to upgrade the training for the navy personnel to make them prepared enough as they could compete with any force across the globe, the premier went on saying.

On behalf of the PM, Chief of Naval Staff Admiral M Shaheen Iqbal distributed prizes among the winners.

The cadets also took formal oaths on the occasion.

Bangladesh Navy arranged a spectacular parade marking the occasion which the premier witnessed virtually from the Ganabhaban.

Sheikh Hasina said Bangabandhu started building all the forces with the limited resources immediately after the country had achieved independence. The Father of the Nation had collected five warships for the navy from two friendly countries – Yugoslavia and India – and commissioned the largest BNS base Isa Khan and gave naval ensign to the navy, she said.

The premier, however, greeted the newly commissioned officers of the Bangladesh Navy and asked them to follow the ideology of Bangabandhu Sheikh Mujibur Rahman as he made the highest ever sacrifice for the nation. She hoped that the fresh cadets would be most efficient and serve the nation being imbued with the spirit of the Liberation War.

The PM also appreciated the navy personnel as they have stood beside the people by putting their lives at risk during the Covid-19 pandemic.

Turning to achieving the vast sea areas after winning legal battles against two next door neighbours, the premier said that she took measures to this end with assuming office in 19996 after 21 years.

She added that after coming to power for the second time in 2009, her government filed separate cases against the countries maintaining friendly relations to establish the rights of Bangladesh in the vast marine areas.

The head of the government said, “We are now working to use the huge sea resources we have for country’s development.”

Bangabandhu had first taken measures in this regard, she said, referring to enactment of “Territorial Waters and Maritime Zones Act-1974” by the Bangabandhu government which the United Nations did in 1982.

But the governments of Zia, Ershad and Khaleda did nothing to this end, she added.

She said the people of the country had been deprived of their rights for long 21 years after assassination of the Father of the Nation along with most of his family members.

The PM said her government has been relentlessly working to build Bangladesh as a prosperous and developed country, free from hunger and poverty, as envisioned by Father of the Nation Bangabandhu Sheikh Mujibur Rahman.

To materialize the dream of making Bangladesh a developed country by 2041, she said her government has been implementing the second perspective plan (2021-2041) and Delta Plan 2100.

The premier reiterated that every person will get home and power in the country before ending the Mujib Borsho, adding that 99 percent houses have already been brought under the electricity coverage.