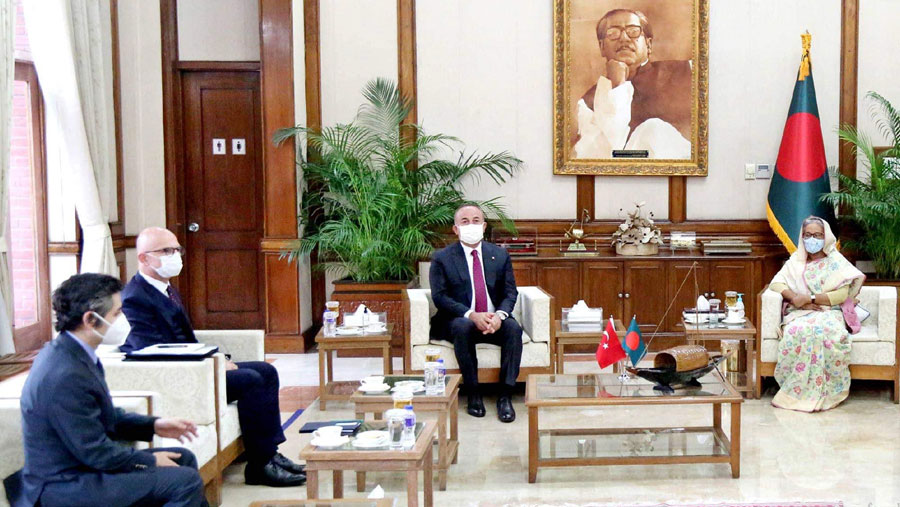 Prime Minister Sheikh Hasina on Wednesday (Dec 23) called for Turkey’s engagement in sustainable repatriation of the forcefully displaced Rohingyas to their homeland Myanmar. The premier made the call when visiting Turkish Foreign Minister Mevlut Cavusoglu paid a courtesy call on her at her official Ganabhaban residence in Dhaka in the morning. PM’s Deputy Press Secretary Hasan Jahid Tusher briefed the media after the meeting.

Sheikh Hasina sought more Turkish investment in the special economic zones being built across Bangladesh by cashing in on the geo-political position of the country in South Asia and South East Asia for mutual benefit of both the countries.

The PM extended her thanks to Turkey for repairing the Bangladeshi navy ship BNS Bijoy badly damaged in the recent Beirut blast in Lebanon.

She reiterated her invitation to Turkish President Recep Tayyip Erdogan to visit Bangladesh.

In reply, Turkish Foreign Minister Mevlut Cavusoglu thanked the Prime Minister for her invitation and said the president of Turkey is likely to visit Bangladesh in March next year, if the Covid-19 situation improves.

He highly praised the unprecedented development in Bangladesh and the leadership of Prime Minister Sheikh Hasina.

The Turkish foreign minister highly praised the different initiatives taken by the government of Sheikh Hasina for successfully tackling the Covid-19 pandemic.

The Turkish foreign minister said that they value the bilateral relations between Bangladesh and Turkey and his government and country are ready to give every support to strengthen the existing trade relations between the two countries.

He added that they have made investments in various sectors in Bangladesh that included energy and tourism.