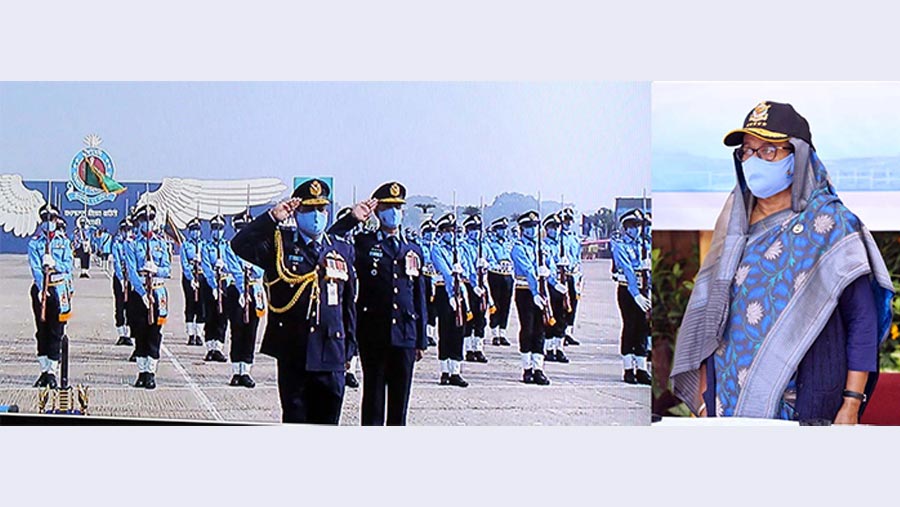 Prime Minister Sheikh Hasina on Sunday (Dec 20) said the process is going on to purchase ultra-modern and high-performance fighter planes for the Bangladesh Air Force (BAF) as part of the government’s move to make the force more developed and a modern to implement the “Forces Goal-2030”.

“The process is underway to purchase more modern and high-performance fighter planes and other equipment for the air force aimed at making it further developed and modern to implement the “Forces Goal-2030”,” she said while addressing virtually as the chief guest of the “President Parade (Winter)-2020” from her official Ganabhaban residence in Dhaka, local media reported.

The premier further said that her government has signed an agreement to purchase five ultra-modern C-130J transport aircrafts and three of which have already reached the country while PT-6 Simulator is set to be inducted soon in the BAF.

To ensure proper and developed training for the air cadets, seven K-8W jet trainer aircraft have already been added to the fleet of the air force, she continued, saying, “The government is firmly committed to continue the pace of advancement of the air force.”

After assuming office after 21 years, the PM said, they have taken measures for overall development of the air force following the footsteps of Father of the Nation Bangabandhu Sheikh Mujibur Rahman.

“We have purchased the most modern supersonic fighter planes MIG-29 for the air force alongside high-power planes, helicopters, radars, missiles that can be launched from land to air and modern war weapons and main equipment to make the force more modern and technology based,” she continued.

The PM said that they have recently opened Bangabandhu Sheikh Mujibur Rahman Aviation and Aerospace University, adding, “We will once attain ability in building fighter planes, transport aircrafts, and helicopters with the knowledge to be obtained from the university.”

She continued: “We even can reach the aerospace one day by exercising science. We will make efforts to this end.”

Noting that the air force will go one step ahead to establish knowledge based society in accordance with the “Vision-2041” through the university, she said that her government will always stand besides the Bangladesh Air Force to this endeavour.

She recalled the contribution of Bangabandhu in building the armed forces with limited resources during his three and a half years of tenure alongside building a war-ravaged country.

The PM said that Bangabandhu had purchased the most modern fighter jets Mig-21, modern transport aircraft, air defence system and helicopters for the air force.

Bangladesh Air Force arranged a spectacular parade and fly past at its Jashore Academy marking the occasion which the PM virtually witnessed from her Ganabhaban residence.

Chief of Air Staff Air Chief Marshal Masihuzzaman Serniabat later gave a vote of thanks to the Prime Minister for joining the programme.

He, on behalf of the Prime Minister, earlier distributed ‘Sword of Honour’ ‘Chief of Air Staff Trophy’ ‘Commandants Trophy’ and other prizes among the best cadets.

Sheikh Hasina called upon the cadets of the air force to serve the nation being imbued with the spirit of the Liberation War and patriotism.

She said, “I want to tell each of the members of the air force to keep in mind that we had achieved independence through a war. So, you would have to make yourself prepared enough so that you can move around the world keeping your heads high.”

The Prime Minister said that her government has been working tirelessly to do whatever necessary for the armed forces so their personnel could compete with the members of army, navy and air forces of other countries with whom they are working in the UN peacekeeping missions.

“We are doing our best to make sure that Bangladesh does not lag behind (from any country) in any field,” she vowed.

The PM urged the fresher to prepare themselves utilizing the training obtained from the Bangladesh Air Force in such a way that they could fulfill the desire of Bangladesh.

She greeted the air force personnel as they extended helping hands in face of the Covid-19 pandemic, saying, “You have set an example with the measures to bring medicare equipment from China and South Korea alongside reaching humanitarian assistances to different countries, including the Maldives and Lebanon and bringing the Bangladeshi nations who were stranded in different countries during the pandemic to our homelands.”

The PM also appreciated their measures to bring the Covid-19 patients to Dhaka and arrange treatment for them and rescue some students from Himchhari.

She said that the green movement which is initiated by planting improved seeds at Nijhum Deep, Domar Char and remote areas across the country by the air force will help maintain the balance of nature.

The PM said her government has initiated the measures of spreading seeds at hilly, char and remote areas across the country through helicopters.

Sheikh Hasina reiterated her vow to build by 2041a developed and prosperous country free from hunger and poverty as envisioned by the Father of the Nation.

Describing the cadets as the soldiers of 2041, the PM said that they have to work for building Bangladesh as a “Shonar Bangladesh” following the ideology of Bangabandhu.