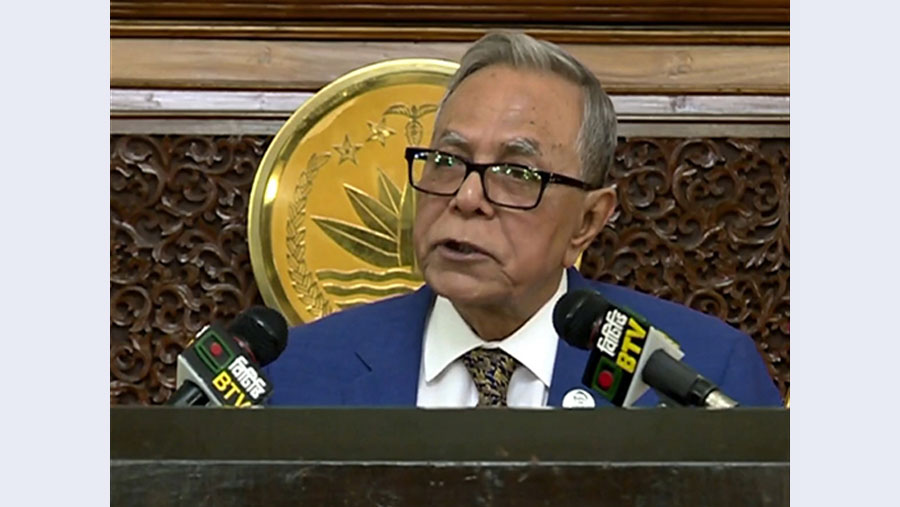 President Md. Abdul Hamid on Saturday (Dec 12) sought all-out efforts of the private sector along with the government to utilize the development potentials of the IT (information technology) sector.

“Focus on the innovation instead of imitation... as technology is the means of development,” he said in a video message while inaugurating the ‘Fourth Digital Bangladesh Day’ at the Bangladesh Computer Council (BCC) auditorium in the capital, local media reported.

President Hamid added: “We need to keep pace with new and changed technologies to reach the benefits of the ‘Digital Bangladesh’ at people’s doorsteps.”

The President said information technology is the most significant discovery of the present time and it has created immense potentials for global development and progress.

Technology is changing rapidly as a result of new discoveries and even many technologies are becoming out of date, Hamid observed.

The head of the state put emphasis on preventing the misuse of information and communication technology at all levels and giving utmost priority to training in this regard.

“We have to make proper use of all scopes created by IT and simultaneously we have to attain ability to thwart its misuse,” he opined.

Noting that the country’s young generation is skilled and enterprising enough in terms of intelligence and ability to adopt the new technologies, the President said, “So, if they are given proper training, they will be able to take the country to the desired goal of development.”

Highlighting the importance of observing ‘Digital Bangladesh Day’ amid the Covid-19 pandemic, he said, “On the eve of Mujib 100-year, we have to face many challenges. The government is making relentless efforts to keep the country’s economy afloat and tackle the fatal disease that has brought a change across the world.”

Due to blessings of the information technology, President Hamid said, it has been possible to stay connected even from a distance even in the existing tough time.

The celebration of the day for the fourth time has a special significance, he said and added: “The distance between village and town has minimized at present.”

It is really praiseworthy that the ICT division has been celebrating the day on Dec 12 every year for the last three years to commemorate the ‘Digital Bangladesh Manifesto’ in line with the Bangladesh Awami League’s electoral pledges, the President mentioned.

Highlighting various ICT development programmes undertaken by the incumbent government led by Prime Minister Sheikh Hasina, he called upon all to try to build the ‘Shonar Bangla (Golden Bangladesh)’ envisioned by Father of the Nation Bangabandhu Sheikh Mujibur Rahman.

“We would be able to move forward with more courage and confidence on the way to building a ‘Developed Bangladesh’ by 2041, following the path of building a ‘Digital Bangladesh’,” President Hamid said.

On the occasion, awards were given to 15 individuals, groups and organizations for their outstanding contribution to the implementation of ‘Digital Bangladesh’ while a video of a play by child artistes was screened.

ICT Division State Minister Zunaid Ahmed Palak presided over the function. Chairman of the Parliamentary Standing Committee on the Ministry of Posts Telecommunication and Information Technology AKM Rahmatullah, ICT division’s Senior Secretary NM Zeaul Alam and secretaries concerned to the Bangabhaban, among others, were present there.