President for equal role of men and women as freelancers 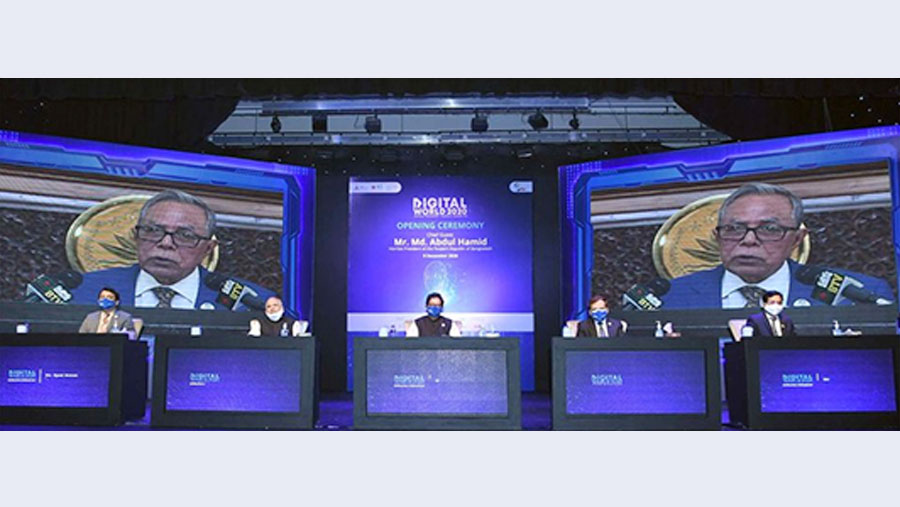 President Md. Abdul Hamid on Wednesday (Dec 9) asked all concerned to be more enterprising so that men and women can move forward on an equal footing in the freelancing profession as he opened virtually the three-day ‘Digital World 2020’ at Agaragaon in Dhaka.

“Men as well as women need to be proactive so that they can move forward on an equal footing in the freelancing profession... Simultaneously, we need to be more focused on regular research and creation of basic knowledge in the field of information technology (IT),” the President said in his recorded video speech from Bangabhaban, local media reported.

Terming freelancing as a new dimension to empower the younger generation, the President said although job opportunities in other sectors are currently declining, freelancing has created enormous employment opportunities for many young people.

He mentioned that Bangladesh ranks second in the world in terms of number of freelancers and at present as many as six lakh freelancers remain active across the country.

Referring to the ongoing pandemic Covid-19 and its subsequent impacts, President Hamid said, “Although I couldn’t attend today’s event of ‘Digital World 2020’ due to Corona situation, I am very happy and proud to be present amongst you due to the contribution of information technology.”

He said it is a shining example of the unprecedented progress made in the field of information technology sector in Bangladesh in last few years.

Abdul Hamid said the Corona epidemic temporarily hampered development and progress but did not stop it (development) and “This is because of the successful implementation of Digital Bangladesh.”

The head of the state categorically said the Corona failed to make any visible impact on Bangladesh’s economy as the country got benefited from the digitization.

During the pandemic, the government continued all private and public official activities online and even in the Corona situation, buying and selling at home through e-commerce, online education activities, judicial activities through virtual courts and telemedicine online services have made life much easier during this tough time, he observed.

The President added: “The e-document system introduced in the office and courts has increased the dynamism in government service. This has made it easier for government services to continue and to reach the citizens.”

Noting that Bangladesh has become today known as a role model of global development, Hamid said there is also a nationwide ‘Before and After Share on the Internet’ campaign to curb rumors and untrue information which is very timely in the current context.

Software and IT services, made in Bangladesh, are now being exported to about 60 countries, including America, Europe, Canada, Australia, the President said, adding that IT exports have grown to over one billion from 26 million in last 12 years since 2009.

“It is expected that this revenue income from this will exceed 5 billion by 2024 and the contribution of software and ICT services to GDP will increase to 5 percent,” Hamid said.

The President said people are sitting at home today, reaping the benefits of the visionary commitment made by the present government in 2009 to turn Bangladesh into a middle-income country and build a knowledge-based society through the implementation of ‘Digital Bangladesh’.

The implementation of various developmental programs of the government in the journey of building a digital Bangladesh through the best use of information technology in all fields has further strengthened the foundation of digital country, he pointed out.

“If this development trend continues... I believe that through the implementation of Vision 2021 and Vision 2041, we will be able to build Bangladesh as a prosperous ‘Shonar Bangla (Golden Bengal)’ earlier envisioned by the Father of the Nation Bangabandhu Sheikh Mujibur Rahman,” Hamid said.

Two audio visual presentations: ‘Bangabandhu – The pioneer of Information Technology of Independent Bangladesh’ and ‘Notable Progress of ICT Sector in Bangladesh’ were screened in the programme.

‘Digital World 2020’ is being held on Dec 9-11, with the theme “Socially Distanced – Digitally Connected”. The theme has been chosen to highlight the impact of Covid-19 and the resilience and determination of people to combat the threat of the pandemic.

“Digital World” is a brand event of Bangladesh Government and is organized in Public-Private Partnership. It is one of the largest ICT expositions and knowledge sharing platforms in South Asia. It provides a platform for sharing the best practices in ICT adoption, achievements and experiences, networking among IT & ITES industry leaders, experts, policy makers, government officials, entrepreneurs and academicians.

Division of the Ministry of Posts, Telecommunications and Information Technology organized the Digital World, with support of various agencies and trade bodies including Bangladesh Computer Council (BCC), Bangladesh Computer Samity (BCS) and Bangladesh Association of Call Centers and Outsourcing (BACCO).

Secretaries concerned to the President were also present there.