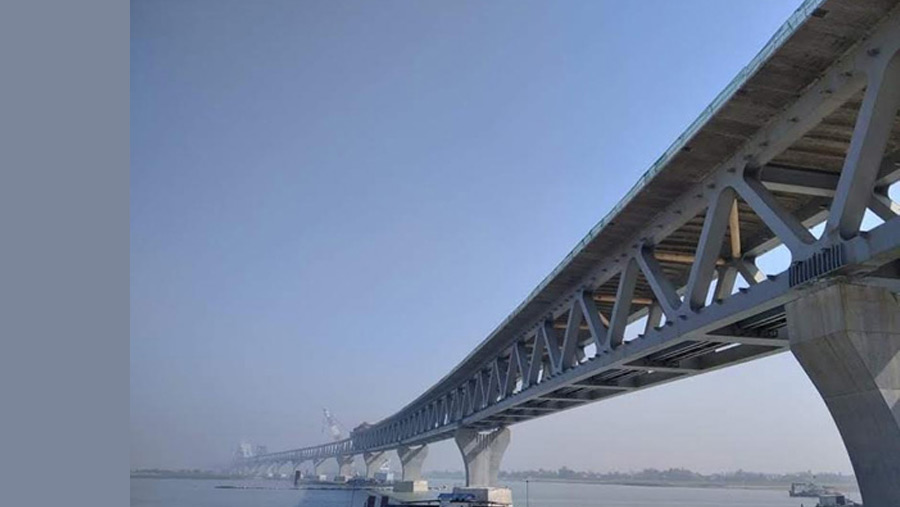 A total of 6,000 meters of the Padma Bridge are now become visible with the installation of 40th span on Friday (Dec 4) that completed 91 percent construction of the main bridge with an overall progress of over 82 per cent, local media reported.

“The span bearing number ‘2E’ has been installed on piers 11 and 12 at around 10:58 a.m. at the Mawa end in Munshiganj district,” said Dewan M Abdul Kader, Executive Engineer of the Multipurpose Padma Bridge.

The official, however, expected that the dreaming padma bridge will be completed totally with the installation of 41st span, adding that the span will be installed on piers 12 and 13 before Dec 15 ahead of the victory day.

A total of 41spans will be installed on 42 piers – 20 spans at Jajira end and another 20 spans have been installed at the Mawa end with the installation of 40th span.

Construction works on the long-cherished Padma Bridge Project began in December, 2015. The first span (superstructure) of the bridge was installed on Sep 30, 2017.

The Padma Bridge is the biggest infrastructure since the independence of Bangladesh, which was initiated by Prime Minister Sheikh Hasina.

The construction of the main bridge is being made by China Major Bridge Engineering Company (MBEC), a Chinese contractor Company, and the river management is being done by Sino Hydro Corporation of China.