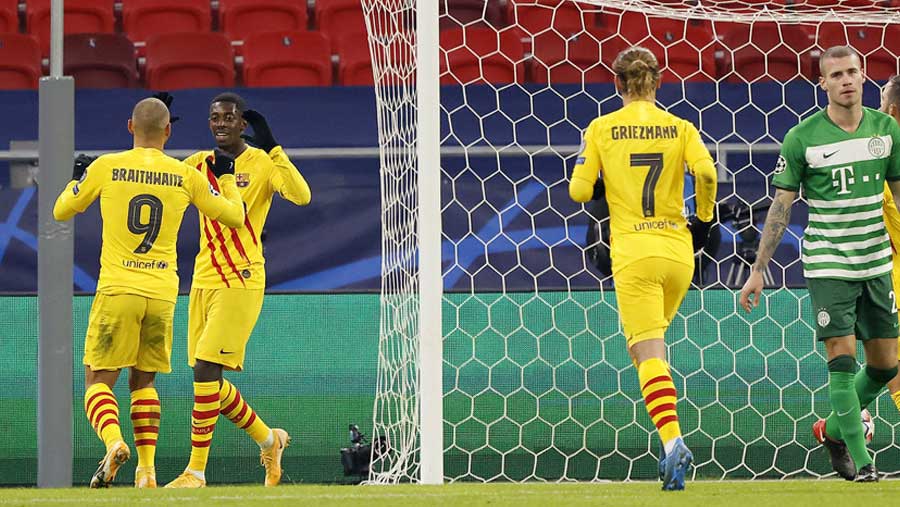 Antoine Griezmann scored for the third straight game to lead an experimental Barcelona team to a 3-0 win at Hungarian champion Ferencvaros in the Champions League on Wednesday (Dec 2).

Griezmann and Martin Braithwaite got the chance to impress up front, aided by inconsistent French winger Ousmane Dembele on the left and 20-year-old Portuguese forward Francisco Trincao on the right.

It didn’t take long for the show to start. Dembele combined well with left back Jordi Alba before crossing for Griezmann to score with his heel in the 14th minute.

It was the first time Griezmann had scored in three consecutive games for Barcelona. The France forward, who endured a difficult first season at the club, celebrated with a little dance.

Dembele fired in a low cross for Braithwaite to score in the 20th. Braithwaite started his first league game of the season against Osasuna on Sunday and now has four goals in his last three appearances for Barcelona.

Abraham Frimpong conceded a penalty when he fouled Braithwaite in the 27th.

Dembele sent goalkeeper Denes Dibusz the wrong way to make it 3-0 from the spot a minute later.

But otherwise the visitors looked comfortable throughout. Koeman brought on highly rated youngsters Riqui Puig and Carles Alena with 25 minutes to go, then American teenager Konrad de la Fuente for the final 10.

Barcelona maintained its grip on the game with Ferencvaros apparently happy to avoid another even heavier defeat after its 5-1 loss in Barcelona.

Juventus defeated Dynamo Kyiv 3-0 at home in the other group game to stay three points behind Barcelona.

Both Barca and Juventus were already assured of progression from the group.

Dynamo and Ferencvaros each have one point.