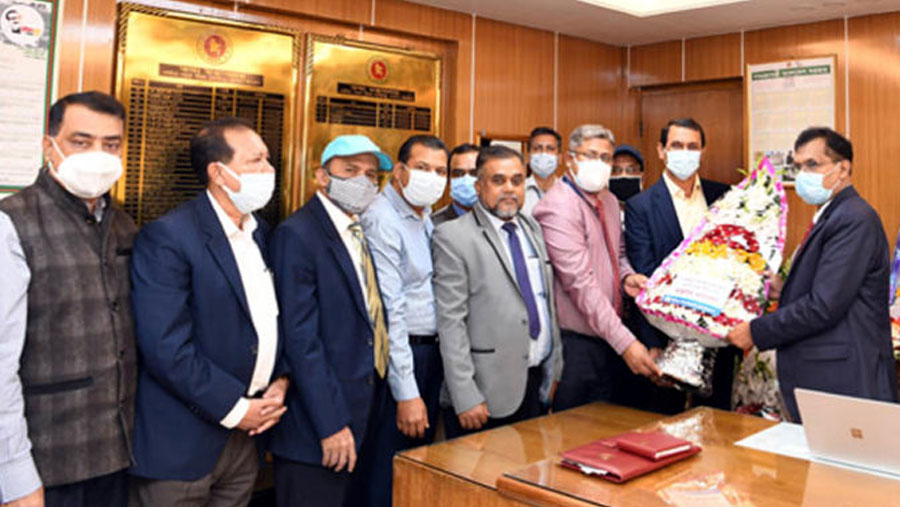 Newly appointed Information Secretary Khaja Miah joined at his new office at the Information Ministry in the Secretariat in Dhaka on Monday (Nov 30).

After joining, he met with Information Minister Dr Hasan Mahmud and joined an introductory meeting with all officials of the ministry, said a press release.

At the meeting, officers and staffs of the ministry as well as different organizations welcomed and congratulated Khaja Miah on his appointment of information secretary.

Khaja Miah, a member of the 10th BCS Administration Cadre, was earlier the chairman of the Bangladesh Inland Water Transport Corporation (BIWTC) with the status of additional secretary. He was appointed as the information secretary on Thursday last with promotion to the secretary status.

After joining the Bangladesh Civil Service in 1991, Khaja Miah first served as an executive magistrate in the Sylhet Deputy Commissioner’s office and as Assistant Commissioner (Land) in Balaganj and Bishwanath Police Stations.

He served as NDC in Narsingdi district from 1999 to 2001. After serving as a first class magistrate in Rajbari, Netrokona and Mymensingh districts, he joined Matlab Upazila in Chandpur district as the Upazila Nirbahi Officer (UNO) in 2003 and joined the Ministry of Posts and Telecommunications as a senior assistant secretary in April 2006.

Later, Khaja Miah worked as the deputy secretary at the Local Government Division and the Ministry of Home Affairs. After serving as the Commercial Counselor of the Bangladesh High Commission in Singapore since 2015, he joined the Ministry of Public Administration on Nov 28 as Additional Secretary.

During his tenure in the Local Government Division, he served for more than two years as the Bangladesh Representative of the Inter-Country Working Group on Water Supply and Sanitation (ODA) comprising with the SAARC member-countries.

He completed a course in Telecommunications and Networking Management at the University of Information and Communication in Seoul, South Korea, and received specialized trainings on local government management and water supply organized by Korea International Cooperation Agency (KOICA) and JICA, respectively.

The newly appointed information secretary also completed a course on Strengthening of BCS Admin Cadre Officers from Duke University in the United States.

Khaja Miah was born on Jul 5, 1965 in Fuldah village under Kalia upazila of Narail district. He passed SSC from Chachuri Purulia High School in 1980 and HSC from Government BL College in Khulna in 1982.

As a regular batch student of 1986, he obtained Bachelor (Honors) and Master degrees from the Sociology Department of Dhaka University.

As part of his official duties, Information Secretary Khaja Miah visited about 30 countries in the Europe and Asia, including the United States, England, China, Japan and Australia.