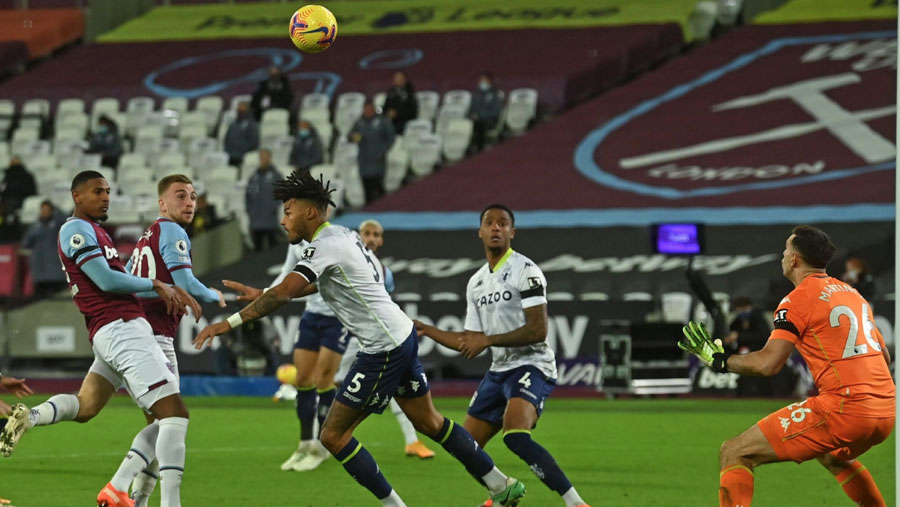 In-form West Ham United rose to fifth in the Premier League after a nervy 2-1 win over Aston Villa on Monday (Nov 30).

West Ham United moved fifth in the Premier League with victory over Aston Villa in a pulsating match at London Stadium.

Villa's Ollie Watkins was denied a stoppage-time equaliser after an agonising VAR wait deemed his upper arm was offside, even though he seemed to be being held back by Hammers defender Angelo Ogbonna.

The former Brentford man also hit the bar with a penalty as the spirited visitors pressed for the leveller their play more than deserved.

David Moyes has quietly established the Hammers as an effective outfit this season and they got off to the perfect start when Ogbonna buried a header past Emiliano Martinez inside the first two minutes.

Villa had won all three of their previous away games and seized control of the first half after that, Jack Grealish whipping an equaliser past Lukasz Fabianski from distance.

But Moyes rang the changes at half-time and it paid immediate dividends as substitute Said Benrahma set up Jarrod Bowen for a delightfully deft header immediately after the restart to retake the lead.

Villa had plenty of chances to draw level but were left to rue Watkins' profligacy and VAR's ruling.

West Ham, meanwhile, gratefully took the win to move to within four points of Tottenham Hotspur and the Premier League summit.