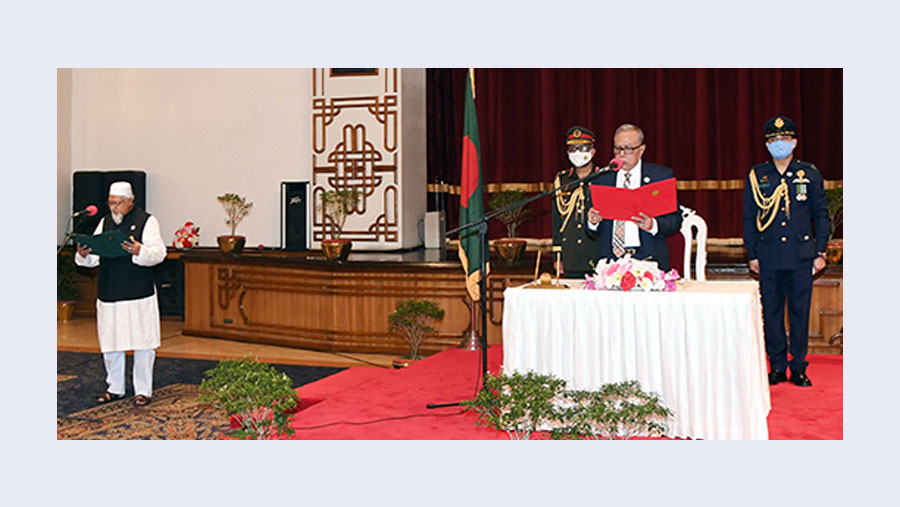 The Bangladesh Awami League government on Tuesday (Nov 24) filled up a vacancy in its cabinet by inducting a new face – Md Faridul Haque Khan – an Awami League MP from Jamalpur-2 (Islampur) constituency as the state minister for religious affairs.

President Md. Abdul Hamid administered the oath to the new office of the state minister for religious affairs, which earlier fell vacant after the death of Sheikh Md Abdullah.

The oath-taking ceremony took place at Bangabhaban’s Durbar Hall at 7 p.m. with a limited number of people by maintaining social distancing and wearing mask.

Cabinet Secretary Khandaker Anwarul Islam conducted the oath-taking ceremony, where only 13 guests were invited, said a source familiar to the process of the President palace.

Faridul Haque Khan was elected as an MP from Jamalpur-2 constituency in the ninth, 10th and 11th parliamentary elections from the Awami League ticket. Khan is the president of the Islampur upazila unit of Awami League.

After the swearing-in, he signed the oath of office and oath of secrecy as well.

On Jan 7 in 2019, Awami League President Sheikh Hasina was sworn in as Bangladesh Prime Minister, serving as the 11th Prime Minister; her third consecutive term.

This is her fourth term in office. With the tenure from 1996 to 2001 and three terms in a row since 2008, she heads for a record 20 years as the Prime Minister as well as the head of the government.