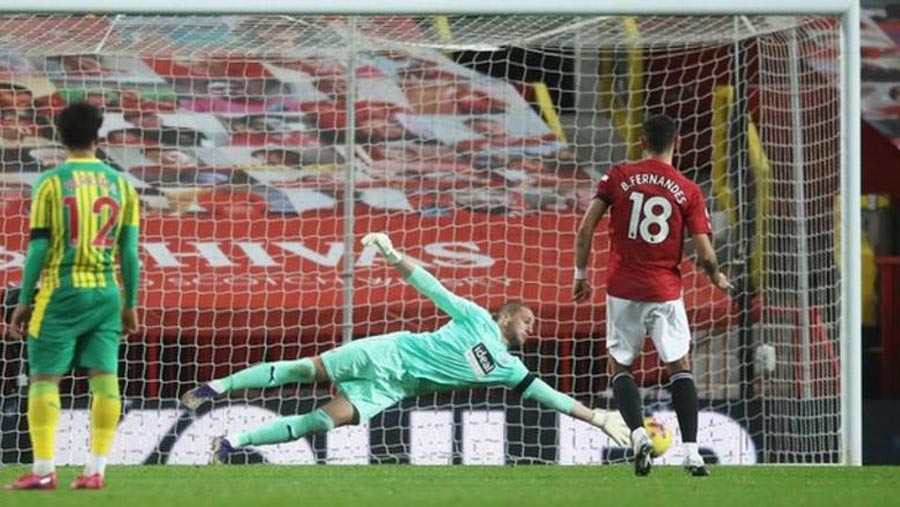 Manchester United edged past West Bromwich Albion with a 1-0 victory at Old Trafford on Saturday (Nov 21).

Bruno Fernandes' twice-taken second-half penalty was enough to give Manchester United their first Premier League victory of the season at Old Trafford over a battling West Bromwich Albion outfit.

Former United keeper Sam Johnstone made a string of superb stops to deny his old club, included a splendid save from Fernandes' initial kick.

However, VAR intervened as Johnstone was clearly off his line and Fernandes made no mistake with his second attempt. The effort ended a wait of 324 minutes for a United goal in the Premier League on home soil – and that was also a spot-kick from the Portuguese against Tottenham Hotspur.

It was harsh on the visitors, who were awarded a penalty themselves a minute after the restart when Fernandes caught Conor Gallagher. But after reviewing the incident on the pitchside monitor, referee David Coote decided the United man had just touched the ball, much to Baggies boss Slaven Bilic's frustration.

The result leaves West Brom, who were without captain Jake Livermore and defender Kieran Gibbs because of positive Covid-19 tests, still waiting for their first win of the season.

After successive victories, United are in the top half of the table for the first time this season. And, given the pressure he was under before the win at Everton on Nov 7, there must be some satisfaction for Ole Gunnar Solskjaer in going above Pep Guardiola's Manchester City in the table.

It is only the second time Solskjaer has done that, and the previous occasion – after the first game of last season – only lasted a week.