Antimicrobial resistance could expose nations to another global emergency: PM 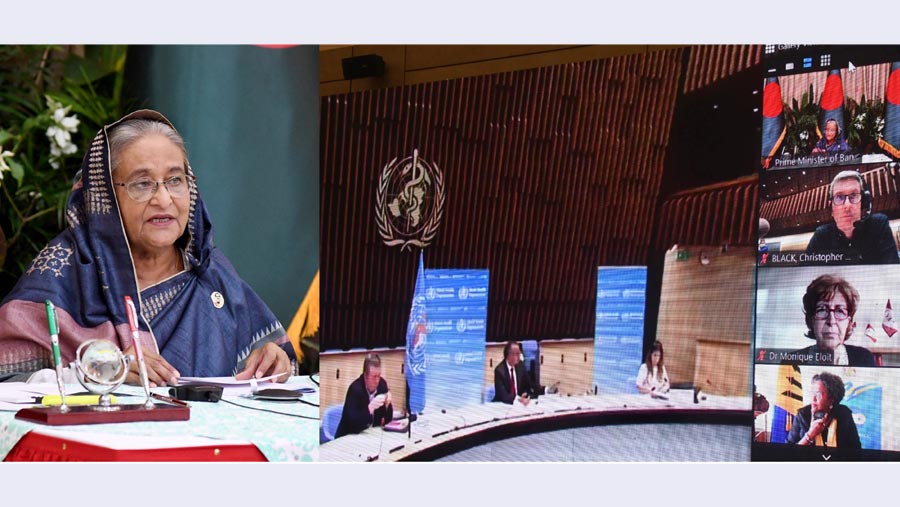 Prime Minister Sheikh Hasina on Friday (Nov 20) called for an internationally coordinated research and investment campaign for new generation antibiotics having universal accessibility amid growing “antimicrobial resistance”, fearing the phenomenon to expose the world to another health emergency, “far severe than the current Covid-19 pandemic”.

“We are running out of available antibiotics (for antimicrobial resistance) and soon could face another global emergency, far severe than the current Covid-19 pandemic,” she told a virtual meeting of global leaders as they joined international agencies to fight the accelerating crisis of antimicrobial resistance called AMR, local media reported.

Sheikh Hasina said the menace “has the potential of rolling back most of our medical and therapeutic successes achieved through scientific advancements over the ages”.

The Bangladesh premier has been elected as the co-chair of ‘One Health Global Leaders Group on Antimicrobial Resistance’ as the World Health Organization (WHO) today jointly launched the grouping with UN Food and Agriculture Organization (FAO) and World Organisation for Animal Health (OIE).

Barbados Prime Minister Mia Mottley was elected as the other co-chair of the platform to spearhead the campaign as drug-resistant bugs’ sparked concerns among global health experts and agencies amidst the deadly Coronavirus pandemic across the globe.

Sheikh Hasina called the AMR crisis an “ominous development” and said the scenario now demanded worldwide coordinated actions to monitor the nature of infections, to implement required control measures and to raise global awareness against widespread use of antibiotics.

“I also call for increased internationally coordinated investment for more research for inventing new generation of antibiotics,” she said simultaneously, adding that every nation must have access to new antibiotics as well.

The Bangladesh premier said AMR became a global public health challenge for animals alongside humans while it endangered food production as well “leading us towards catastrophic result.”

“As the co-chair of this initiative, I look forward to work with my esteemed co-chair and the global leaders to combat the challenges for the health of people, animal and for safe food and crop production and risks for the whole environment,” she said.

Sheikh Hasina urged the global leaders to make “this timely initiative” successful by providing advocacy, technical and financial support for effective implementation of the recommendations of the ‘Inter Agency Coordination Group on Antimicrobial Resistance’ to address the crisis.

She expected the “Leaders’ Group” to be successful to mainstream the vital health issue “in all our important discourses” contributing to a united global effort to fight the ominous development of antibiotic resistance”.

The prime minister reaffirmed an existing health expert assertion that “unnecessary use of antibiotics, wrong doses and overall poor infection prevention” were causing a grave situation.

Sheikh Hasina informed the meeting that being inspired by the WHO Global Action Plan in 2015, Bangladesh by now formulated the “National Action Plan for Antimicrobial Resistance Containment 2017–2022” as an important component of the country’s efforts to ensure universal health for all.

She thanked the important tripartite partners – WHO, FAO and OIE – for their initiative to establish this group for coordinated action and collective global governance to address the serious challenges of the Antimicrobial Resistance.

According to health experts AMR threatens the effective prevention and treatment of an ever-increasing range of infections caused by bacteria, parasites, viruses and fungi.

They say AMR, often referred to as referred to as “superbugs”, occurs when bacteria, viruses, fungi and parasites change over time and no longer respond to medicines making infections harder to treat and increasing the risk of disease spread, severe illness and death.

As a result, the medicines become ineffective and infections persist in the body, increasing the risk of spread to others.