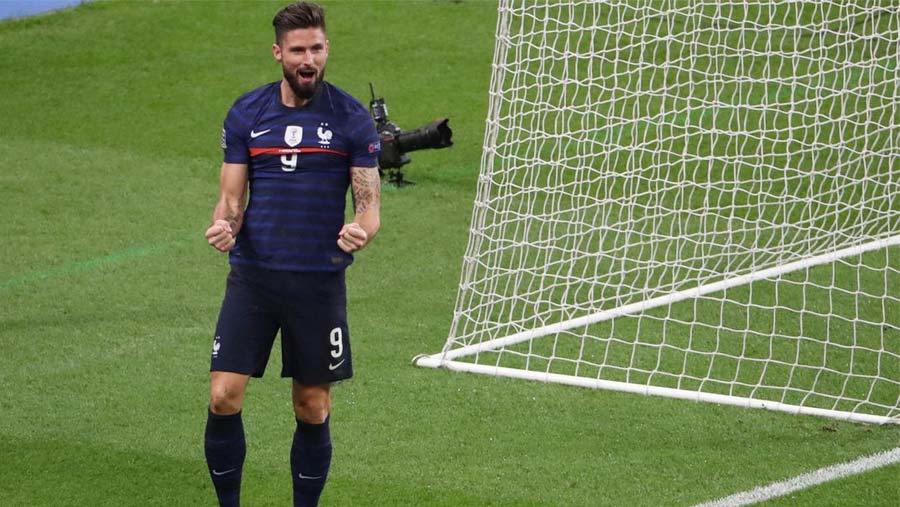 Olivier Giroud has scored twice to come close to the France team’s goal record as the Nations League group winner beat Sweden 4-2 and relegated it on Tuesday (Nov 17). Giroud’s total of 44 goals puts him seven behind the record of 51 goals for France great Thierry Henry.

Striker Olivier Giroud moved closer to Thierry Henry's goal-scoring record as France survived a late rally to relegate Sweden. Giroud netted in each half to move to 44 goals, seven behind the Arsenal legend's mark.

Sweden will now drop into League B.

World champions France had already qualified for one of the four Nations League finals berths next year but went behind when Claesson's long-range strike went in off Raphael Varane.

Giroud soon equalised, turning in a cross from Marcus Thuram, the son of 1998 World Cup-winner Lilian.

Thuram, who was making his first competitive start, then weaved into the area and found Bayern Munich right-back Pavard, who fired in.

Giroud added a third after the break from Kylian Mbappe's cross, the Paris Saint-Germain striker getting an assist 70 seconds after coming on.

Quaison set up an exciting finale when he tapped in but as Sweden pushed everyone – including Everton goalkeeper Robin Olsen – up for a set-piece deep into stoppage-time, France were able to clear and leave Coman to score into an empty net.