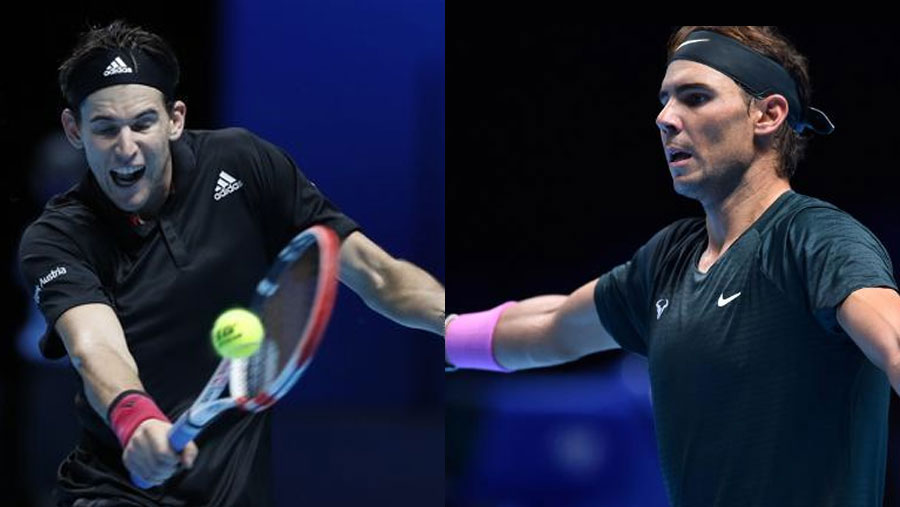 Dominic Thiem mastered the tiebreakers again to get the better of Rafael Nadal, and defending champion Stefanos Tsitsipas also won Tuesday (Nov 17) on Day 3 of the ATP Finals.

Thiem beat the 20-time Grand Slam champion in straight sets and secured his spot in the semifinals when Tsitsipas outlasted tournament newcomer Andrey Rublev in the evening match at an empty O2 Arena.

Thiem clinched a 7-6 (7), 7-6 (4) win on his fifth match point in his first meeting with Nadal since the Australian Open quarterfinals in January, when the Austrian player prevailed after winning three tiebreakers in a tight four-set match.

''If I want to look for mistakes or for things I didn't do right, I think I wouldn't find many,'' Thiem said.

The U.S. Open champion opened group play in the season-ending event with a three-set victory over Tsitsipas on Sunday and qualified for the semifinals when Tsitsipas won 6-1, 4-6, 7-6 (6), handing Rublev his second defeat.

On Wednesday, top-ranked Novak Djokovic will play Daniil Medvedev – both players won their opening matches – and Alexander Zverev faces Diego Schwartzman, with both in search of their first victories.

Nadal, who beat Rublev in straight sets in their opener, missed a chance to qualify with a match to spare and next will play Tsitsipas on Thursday with a semifinal place at stake. Nadal has never won the ATP Finals, one of few gaps on his resume.

Nadal credited Thiem but described the match as ''very equal.''

''Both of us played at a very high level. He deserved to win because he played a little bit better at some key moments,'' Nadal said.

''I am much more confident now with the level of tennis that I am playing than a couple of days ago.''

Thiem, who described his performance as one of the best of his career, won the first set after coming from 5-2 down in the tiebreaker, saving two set points in the process.

There was high-quality shot-making throughout the match, but not least when Thiem produced two inside-out forehand winners in a three-point span to close the tiebreaker – the first on set point for Nadal – and then to clinch the set.

''It was a great match from the first to the last point,'' Thiem said, ''but actually I was pretty lucky to get that first set.''

After both players had their service broken in the second set, Nadal saved three match points when serving at 5-4 and 40-0 down. He won five straight points in that game, with one including a lob from a 'tweener that Thiem just managed to get back before Nadal powered a backhand down the line.

Thiem won three straight points to move 6-3 ahead in the tiebreaker. Nadal saved another match point but sent a tired backhand just wide to lose the match.

On the day Austria went back into lockdown amid a second wave of the coronavirus pandemic, one of the country's greatest sports stars was happy to put on a show for his compatriots.

''I hope people enjoyed the match back home,'' Thiem said, ''and forgot a little bit for a few hours the tough times we are living through right now.''

Tsitsipas cruised early on against his Russian opponent, requiring just 19 minutes to win the first set. But Rublev found his serve and it was a slugfest thereafter. The match clocked in at just under 1 hour, 56 minutes.

In the third set tiebreaker, the 22-year-old Greek player saved match point when Rublev double-faulted for 6-6. Rublev then returned a deep shot into the net, and Tsitsipas pumped his right fist in celebration.

''Even though it was a win, I still feel like there's plenty to improve and get better at,'' Tsitsipas said.

The ATP Finals move to Turin, Italy, next year, after 12 years in London.