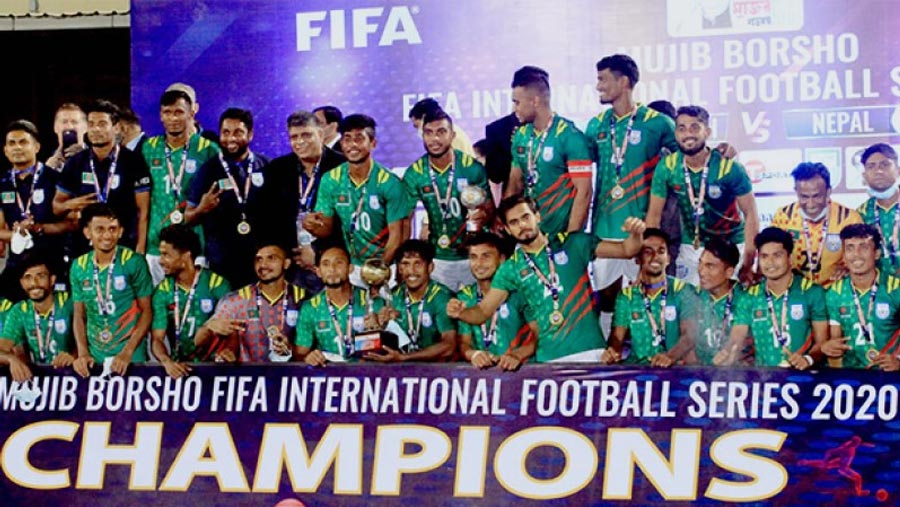 Bangladesh won the much-expected series against visiting Nepal after the hosts played out to a goalless draw in the second and final match of the ‘Mujib Barsho’ FIFA International Friendly series at Bangabandhu National Stadium in Dhaka on Tuesday (Nov 17).

Bangladesh won the series following their 2-0 victory in the first match. The two-match series was earlier dedicated to the birth centenary of Father of the Nation Bangabandhu Sheikh Mujibur Rahman.

This series victory against Nepal will definitely inspire Jamal and Co. to play good brand of football against Asian Champions Qatar in their FIFA World Cup Qualifying round match to be held next month.

Nepal got the first scoring chance early in the 4th minute when midfielder Tej Tamang’s rebound shot from the close range went straight to the hands of Bangladesh custodian Ashraful Islam.

Bangladesh got the first notable scoring chance in the 24th minute when Suman Reza after taking the ball, took a left footer long range powerful shot, but the ball went out of play inch over the cross bar.

Suman again failed to utilize the chance in the 31st minute when following a counter attack, onrushing Suman failed to push the ball properly from inside the D box and Nepal custodian Kiran Chemjong easily gripped the ball diving his left.

After the resumption, Nepal again went attack in the 55th minute. This time Chirring Gurung provided a pass at the danger zone where Nawayug Shreshtha and Sujal Sreshtha failed to utilize the opportunity.

Nepal got their best scoring chance in the crucial moment. Nawayug must considered him as unlucky as his brilliant header from close range returned to play after hitting the right side pole.

In the first half of the game, the Nepalese launched repeated attacks but failed to score against Bangladesh’s packed defense. In the second half the visitors however lost a little bit of tempo.

Bangladesh also increased the tempo after the resumption but failed to utilize those lacks of proper finishing.

Earlier, in the first match, Bangladesh beat Nepal by 2-0 goals by taking a 1-0 lead in the series.

Mahbubur Rahman Sufil, who was the hero of Bangladesh’s magnificent victory in the first match, was given the most valuable player award.

Team manager Amer Khan said such kind of tournament should arrange in regular basis so that the country’s football can gradually move forward.

He also thanked the Bangladesh Football Federation for arranging such kind of tournament and congratulated the players for winning the series.