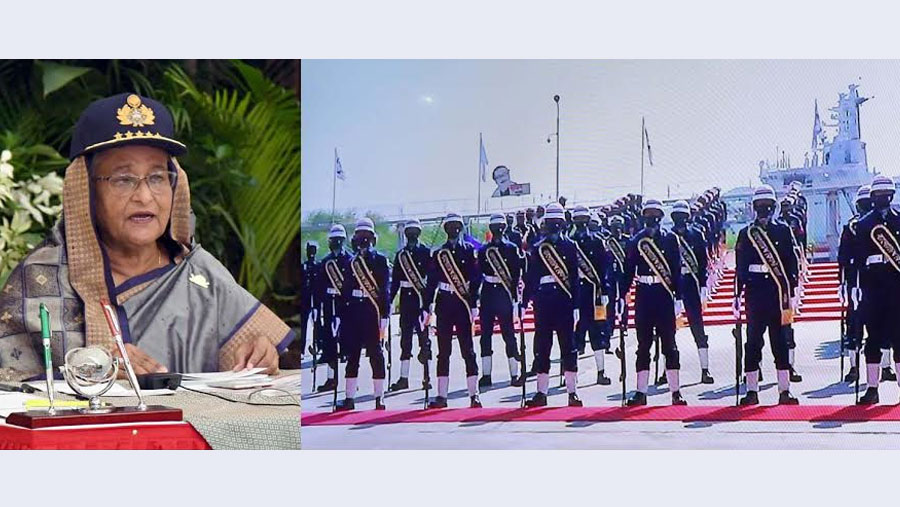 Prime Minister Sheikh Hasina on Sunday (Nov 15) said her government has taken initiative to turn Bangladesh Coast Guard (BCG) into a modern and timely force to make it capable enough to discharge duties properly as its work range increases day by day.

“We have taken initiative to build the coast guard a modern and time-worthy force to make it more capable to perform its wide-range duties appropriately,” she said.

Sheikh Hasina said BCG will have to maintain the law and order along the huge coastal belts and marine boundaries, ensure security to sea ports, protect fishes, conduct anti-smuggling, anti-drug and anti-pirate raids, save lives and properties of coastal people during natural disasters alongside protecting mother Hilsha and Jhatka.

The premier asked the coast guard personnel to remain always vigilant across the maritime boundaries as Bangladesh wants to tap the potential of the blue economy by using its huge sea resources.

In this connection she said, “We have already announced the Blue Economy for our economic development and taken a plan regarding how we use the huge marine resources in our overall development.”

Praising the coast guard highly for its success in discharging duties accordingly, she said, “I’m giving you assurance of extending all sorts of cooperation to keep running the coast guard’s continued progress and for overall welfare of its personnel.”

The PM also asked the BCG personnel to discharge their professional duties with patriotism, honesty and dedication.

“You have to pay special attention to make intact the goodwill of the coast guard while you perform your duties,” she added.

The premier also unveiled the nameplates of the newly commissioned-ships, and a BCG base by pressing a button.

BCG Director General (DG) Rear Admiral M Ashraful Haque gave the welcome address and handed over the “commissioning forman” to the respective captains of the ships from the Coast Guard Berth, Patenga, Chattogram.

Earlier, a video documentary on Bangladesh Coast Guard and the newly commissioned nine ships including two OPVs imported from Italy and the BCG Base was screened on the occasion. A smartly turned out contingent of BCG gave salute to the PM through a spectacular parade.

Sheikh Hasina said Father of the Nation Bangabandhu Sheikh Mujibur Rahman had formulated the Territorial Waters and Maritime Zone Act in 1974 aimed at establishing legal rights of Bangladeshi people on the huge maritime area and its resources.

She added that assuming office in 1996, the Awami League government had taken initiatives to this end and finally Bangladesh achieved its rights on the vast sea area and its resources after coming to power for the second term. But the governments of Ziaur Rahman, Khaleda Zia and HM Ershard did nothing in this respect, she continued.

Turning to enhancing operational capacity of the coast guard, the premier said the government has a plan to increase its manpower to 15,000 from the existing 4,781 in line with the Vision 2030 and 2041 as part of enhancing the force’s capacity to ensure security in the deep sea and protect marine resources.

As many as 55 vessels have been built for the coast guard alongside building houses and messes for the officers and employees of the BCG bases, houses of captains of the ships and administrative buildings in the last 12 years, she added.

The PM said that her government has taken initiatives for procuring hover-draft, drone and ships having capacity of 3500 tons suitable for every season while Khulna Shipyard is currently building two inshore patrol vessels, one floating drone, two tug boats and 16 boats for the force.

She further said that one dockyard is being built at Gazaria for enhancing the maintenance capacity of the coast guard, hoping that the dockyard will build ships in the coming days.

The premier, however, reminded all that Bangladesh Coast Guard was formed upon a resolution placed for ensuring security of the coastal areas by then main opposition Awami League in 1994. She said that their proposal was passed in the parliament by division vote due to lower presence of treasury bench lawmakers.

In this connection, the PM said, “It was a rare instance that a resolution placed by the opposition was passed in the parliament. We had created history in 1994.”