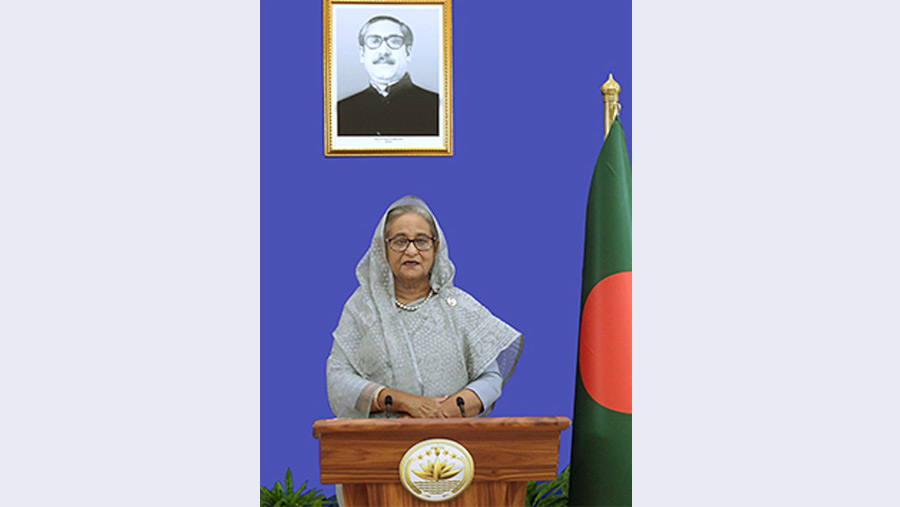 “The Covid-19 pandemic is a stark reminder that no one is safe until everyone is safe. In order to reduce inequality, eradicate poverty and protect our planet by reducing carbon emissions, we need to work together and reinforce our multilateral efforts,” she said.

A prerecorded video speech of the premier was aired at a high level event in support of multilateralism titled “Call for action to reinforce multilateralism” organised by the government of Spain.

Sheikh Hasina said, “In today’s globalized world, constructive multilateralism is not an option; it is the only way-out for a rules-based international order and common progress of humankind.”

Mentioning the Covid-19 pandemic has taught us that the global prosperity is embedded in collective actions, unity and international cooperation, she said, “History proves that any deviation from this united approach will only bring disastrous effects for the humankind.”

To face crisis caused by the pandemic, the premier said, “We have so far allotted 14.14 Billion US Dollars, which is 4.3% of our GDP, to protect the livelihood of our people”.

Despite the impact of the pandemic, she said that Bangladesh’s GDP registered a 5.24 percent growth due to the government’s timely interventions.

She however opined that unless a multilateral effort is undertaken at the global level, global recovery will not commence and will never be sustainable.

The PM however expressed her resentment on the recent trend of protectionism and xenophobia in some countries that may bring further sufferings for the innocent people and adversely put impact on the peaceful multilateral environment.

“So, all of us should guard against this type of activities which are detrimental to international peace, security and global development,” she opined.

Sheikh Hasina said that Bangladesh is a flag bearer of multilateralism and strongly pursues international peace and security by its high presence in the UN Peacekeeping and peace building process.

She added: “We have adopted the ‘whole of the society’ approach in realizing the SDGs. We are equally committed to implementing the Paris Agreement.”

As such, Bangladesh has been honored to be chosen to lead the 48-member Climate Vulnerable Forum for the second time, Sheikh Hasina said, adding that, “We have also qualified to be graduated from LDC status in which the UN system played a crucial role. It reflects our commitment and trust in multilateralism.”

Noting that Bangladesh has adopted the Political Declaration on 21st September to commemorate the 75th anniversary of the UN, she said, “In the declaration we laid emphasis on shared responsibility and collective efforts for our unified prosperity and to advance the 2030 Agenda for Sustainable Development Goals and the Paris Agreement. However, to achieve the benefits out of these international instruments and understanding, strong multilateralism is required. “

The premier said that the spirit of multilateralism and international cooperation is enshrined in the Constitution of Bangladesh which says: “We may prosper in freedom and may make our full contribution towards international peace and cooperation in keeping with the progressive aspirations of mankind”.

She continued that Bangladesh’s Father of the Nation Bangabandhu Sheikh Mujibur Rahman also highlighted the importance of collective efforts and the role of the UN in his statement at the UNGA in 1974.

“Bangabandhu said: ‘The United Nations remains as the centre of hope for the future of the people in this world of sadness, misery and conflict’. His comment still remains to be the bedrock of our multilateral engagements,” the prime minister went on saying.

A commemorative video marking the UN 75th anniversary and remarks (video) by the UN Secretary General were also screened on the occasion.