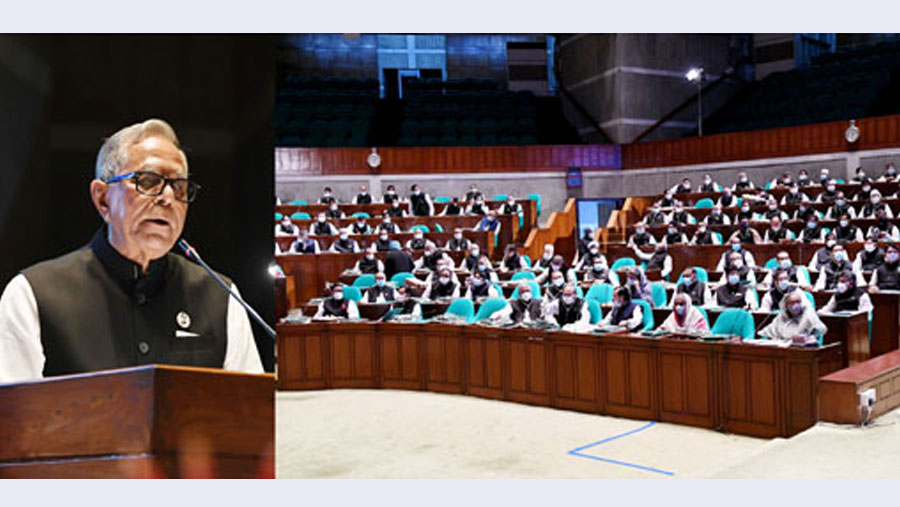 President Md Abdul Hamid on Monday (Nov 9) said extensive campaign are needed to instill Bangabandhu’s philosophy and ideals so it could inspire the future generation as he addressed a special Jatiyo Sangsad session to mark the Mujib Year.

“Bangabandhu will be the source of inspiration for all,” said the President as he urged everyone concerned to contribute to spread his ideals to the future generation.

The President pointed out that politicians, historians, academics, researchers and journalists could contribute in particular in disseminating Bangabandhu ideals in Bangladesh and beyond its territory.

He added: “The Father of the Nation has enlightened the world by being a beacon of freedom-loving oppressed people. New generation can be inspired by Bangabandhu’s principles, ideals and the spirit of the Liberation War.”

The Jatiyo Sangsad was called to session coinciding with the Father of the Nation’s birth centenary while leader of the House and Prime Minister Sheikh Hasina and parliamentarians of both treasury and opposition benches were present as Speaker Dr Shirin Sharmin Chaudhury chaired the sitting.

“Late Bangabandhu is as strong as the living Bangabandhu. As long as Bangladesh will exist, he will remain alive in the hearts of Bengalis,” said Hamid, adding that Bangabandhu Sheikh Mujibur Rahman is not mere a name “he is an institution, an entity and a history as well”.

The President said no scope was there to see Bangabandhu and Bangladesh separately and “if you want to know Bangladesh, you have to know about country’s Freedom Struggle and Liberation War of Bengalis and also Bangabandhu”.

He said those who tried to separate these two entities – Bangabandhu and Bangladesh – have failed ultimately.

The President entered the House at 6.08 p.m. when the national anthem was played. Standing their respective chair, the lawmakers showed their due respect. Then the historic speech of Bangabandhu’s Homecoming Day on Jan 10 in 1972 was screened. President Hamid started delivering his speech in the historic special the Jatiyo Sangsad session at 6.35 p.m.

After the Coronavirus outbreak, the whole world, including Bangladesh, has fallen into a deep crisis leaving billions of people jobless, the President said. But due to the time-befitting steps of the government led by Prime Minister Sheikh Hasina, Bangladesh is coping with the Corona situation successfully, he added.

The President urged the United Nations, different multinational organizations and developed countries to come forward to ensure that all countries and regions of the world get the Corona vaccine at the same time and equally.

Hamid also prayed for the eternal peace of the departed souls of those politicians, academics, lawyers, artists, writers, journalists, government officials, doctors, nurses and people of different professions who died in the Coronavirus pandemic since last March this year.

In his speech, the President also reiterated his call to all international organizations and countries, including the United Nations, to provide the necessary assistance to ensure the safe and dignified repatriation of one million Rohingya refugees, who took shelter in Bangladesh territory being the worst victims of the military atrocities in their Rakhine state homeland in neigbouring Myanmar.

He said the Bengali nation needs to forge unwavering people’s unity, specially the pro-liberation forces to build exploitation free “Shonar Bangla” (Golden Bangla) as envisioned by the Father of the Nation by building a strong resistance against communalism, discrimination, intolerance and terrorism.

The President observed that under the strong and farsighted leadership of Bangabandhu’s worthy successor, Prime Minister Sheikh Hasina, Bangladesh has risen to the status of a lower-middle-income country by achieving most of the Millennium Development Goals (MDGs) in 2015.

“In 2018, Bangladesh, for the first time, has fulfilled all the conditions to achieve a developing country status from a least developed country,” he mentioned.

Bangladesh has achieved unprecedented success in various indicators of socio-economic development indices, the President said, adding that Bangladesh is now far ahead of the neighboring countries and today Bangladesh is the fastest growing country in Asia.

Hamid said after achieving more than 6 percent growth for three consecutive years, the growth in 2018-19 fiscal year stood at 7.1 percent.

The President said the per capita income of the people has risen to about US $2064 and the foreign exchange reserves are now above 41 billion US dollars. At the time of country’s independence, the average life expectancy was 47, but now it is over 72 years.

The number of primary school-going kids is about cent percent while the literacy rate has increased to 74.7 percent and infant and maternal mortality rates have declined, he pointed out.

Although the amount of agricultural land has been gradually reducing, President Hamid said, “We are self-sufficient in food production today. The poverty rate has come down to 20.5 percent in 2019 which was 40.0 percent in 2005,” he said.

With the aim of building the ‘Shonar Bangla’ as per Bangabandhu’s dream, President Hamid said the government has adopted a multi-dimensional action plan entitled ‘Vision-2041’.

The main objective of the incumbent government’s development ‘Vision 2041’ is to build a hunger-and-poverty-free, developed and prosperous Bangladesh, ending the extreme poverty by 2031, rising to the status of an upper-middle-income country, and becoming a high-income country by 2041 with eradicating poverty and per capita income of more than 12,500 US dollar, he added.

Giving a salient feature of the incumbent government’s development goals, the President said it is necessary to increase the GDP growth to 9 percent in the period of 2021-2041. Simultaneously, it has to ensure nutrition and food security, massive industrialization, economic integration, urbanization, cent percent electrification, energy diversification, climate change impact and building a merit-based society.

Mentioning some mega-projects which are the incumbent government’s outstanding achievements he said, “The Padma Bridge of our dream is now nearing completion. Work on the metro-rail and the Payra deep seaport is underway. Construction of the first tunnel of multi-lane tunnel beneath the Karnaphuli River in Chattogram has been completed.”

The railway communication network is being expanded all over Bangladesh. A deep seaport will be constructed at Matarbari. In the wake of having our own satellite and nuclear power plant, Bangladesh has now landed in the age of world-class express highway that Sheikh Hasina inaugurated it through video-conferencing on Mar 12, which is a unique gift of the Mujib-Year for the nation, President Hamid told the House.

The President noted that the premier has earned different prestigious and international awards for her uncompromising and charismatic leadership for ensuring peace and security, development, democratic practice, good governance, eliminating terrorism, empowering women, developing and expanding education, health including immunization for children, and ICT sector and mitigating challenges caused by environmental changes.

The President, a very close aide of the country’s founding father Bangabandhu, congratulated the head of the government as these international acclaims have elevated the image of Bangladesh to a new height across the globe.

Despite there was a very few members in the opposition bench, they had got enormous scope to express their opinion freely and the then parliament sessions were very vibrant as well as interesting.

Referring to Bangabandhu’s 7 March address as a historic one, Abdul Hamid told the House that it was a unique example of how a speech can awaken a whole nation, and encourage them to join a liberation war for independence.

“Not only did Bangabandhu call for independence through this speech, he also provided directions on the outline of a liberation war and what should be done in the coming days. This address became a source of inspiration not only for the Bangali nation, but also for all repressed and freedom-seeking people across the globe,” he said.

The UNESCO included the 7 March Speech of Bangabandhu in the ‘Memory of the World International Register’ by according it the status of a ‘World Documentary Heritage, the President mentioned.

At the very outset of his address, the President paid tribute to Bangabandhu Sheikh Mujibur Rahman, the greatest Bengali of all time, all valiant freedom fighters and other patriotic souls who had to sacrifice their lives for the sake of the country and nation in different time.