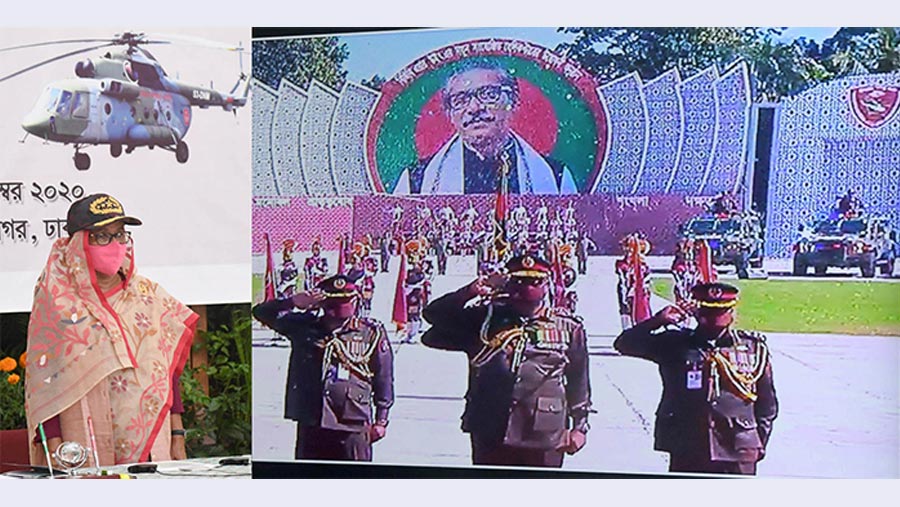 “From now on, BGB would roam over water, land and sky to protect country’s sovereignty,” she said.

The PM was addressing virtually as the chief guest a ceremony on helicopter induction into BGB Air Wing at Peelkhana Bir Uttam Anwar Hossain Parade Ground in Dhaka from her official residence Ganabhaban, local media reported.

Mentioning that two modern MI-171E helicopters have been procured from Russia to turn BGB into a 3D force, the PM said “it’s not only BGB’s development rather a matter of pride and joy for country’s people in Mujib Borsha.”

Sheikh Hasina hoped that these two helicopters would play more effective role in conducting BGB’s operational and administrative activities, especially at the hard to reach areas of Chattogram hills tracts.

She added that Father of the Nation Bangabandhu Sheikh Mujibur Rahman at the closing parade of the third batch of the then Bangladesh Rifles, now BGB, on Dec 5, 1974 had said this force would play a significant role in protecting country’s sovereignty alongside economy through guarding border and containing smuggling.

“I hope each BGB soldier would uphold this force’s fame and dignity through discharging duties with honesty, faith and patriotism keeping the aspiration of the Father of the Nation in mind,” she continued.

Later, a replica of MI-171E helicopter was given to Prime Minister Sheikh Hasina.

At the beginning of the function, a smartly turned out contingent of BGB gave salute to the PM.

Mentioning that the Awami League government has taken massive reform and development activities to turn BGB into a modern border force, the PM said, “To this end, Border Guard Bangladesh Act-2010 was passed while a plan for ‘Border Guard Bangladesh Vision 2041’ has been adopted to make it a world class border security force.”

She said as per BGB’s new organizational structure, five regional headquarters have been set up in last 12 years while the command structure decentralization has made the force more dynamic.

Border Security Bureau has been established by strengthening BGB’s intelligence unit and four new sectors, five regional intelligence bureaus and 15 battalions have also been set up alongside completing the reform activities by introducing 140 new border outposts, 34 BSPs and an air wing.

Mentioning that her government since 2009 has so far appointed 30,146 personnel, the PM said there is also a plan to increase manpower by another 15,000 in three phases.

In the first phase, process for a region headquarters, a sector headquarters, four battalions, a K-9 unit, a region intelligence bureau, a station headquarters and a guard police battalion comprising 4,282 personnel is underway which would be completed by 2022, she continued.

Besides, a proposal is under consideration to establish a sector, five battalions, a reserve battalion, a K-9 unit and training centre comprising with 5,782 personnel as well as an increase of manpower for five border guard hospitals in second phase, said Sheikh Hasina.

A scheme has  also been taken to install a smart digital surveillance and tactical response system in 328km border on priority basis to stop smuggling, she added.

She said 120 all-terrain vehicles (ATVs) have been procured to bring dynamism in BGB’s patrolling to prevent smuggling while 12 APCs and 10 riot control vehicles for overall protection in border and domestic security.