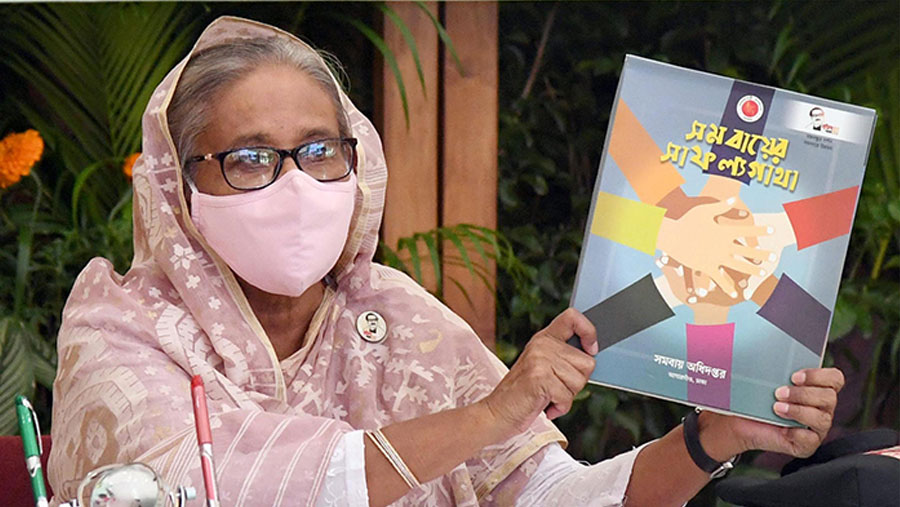 Aiming to enable cooperators meet their common economic and social needs and aspirations through jointly-owned enterprises, Prime Minister Sheikh Hasina on Saturday (Nov 7) stressed the need for formation of village multipurpose cooperative societies to rid the country of poverty completely.

With a strong faith in the cooperative movement that has immense potential to deliver goods and services in areas where the administration and private sector scarcely reach, the government advocates for forming multipurpose cooperative societies to protect the weaker sections of society.

“No poverty will remain in Bangladesh if we can form rural multipurpose cooperative societies. Poverty will be stamped out completely. We have to do it,” she said.

The premier urged the people involved in the cooperative movement to play a major role to help the government making Bangladesh a developed country free from hunger and poverty.

She expressed satisfaction over increasing numbers of cooperative societies and their members, but advocated for more participation of women in the cooperative movement.

“The number of cooperative societies and its members now stands at 1.90,534 and 1,14,84,747 respectively. Many women get them involved in it, but I want more participation of women as they represent half the country’s population. If the participation of women is increased corruption will be decreased and the activities of the cooperative societies will get further pace and thus their families will be beneficiaries,” she said.

Referring to the Father of the Nation’s policy of making development through cooperative societies, the PM called upon all the people involved in cooperative societies to work with utmost sincerity and responsibility as the associations become permanently profitable and production-oriented.

She continued, “The most important thing for a cooperative society is to work in unison and for the welfare of everyone.”

Mentioning that marketing of the produced goods of the cooperatives societies is a major challenge for their survival, the Prime Minister said that they have been working on establishing food and agriculture goods processing zones alongside taking other measures, to ensure marketing of their goods.

Sheikh Hasina said her government has been attaching priority to the cooperative societies to ensure a balanced development of the country irrespective of the rich and poor as well as its huge potential of generating employment.

“The development should be done from the grassroots and we are doing that,” she said, adding that cooperative societies could play a pivotal role to this end.

Department of Cooperatives under the Ministry of LGRD and Cooperatives organized the event at the Bangabandhu International Conference Centre (BICC) in Dhaka.

On behalf of the PM, LGRD and Cooperatives Minister Md Tazul Islam and its State Minister Swapan Bhattacharjee handed over the National Cooperative Award of 2019 to nine cooperative societies and one individual in different categories for their contributions to the sector.

Secretary of Rural Development and Cooperatives Md Rezaul Ahsan gave the welcome address while Registrar and Director General of Department of Cooperatives Md Aminul Islam and President of Bangladesh Cooperative Union Sheikh Nader Hossain Lipu were present on the dais.

A video documentary was also screened on the development of Bangladesh and cooperatives at the function.

Earlier, the premier unveiled the cover of a publication titled “Samobayer Safollyagantha”.

Sheikh Hasina, also president of the Bangladesh Awami League, said her government has been working untiringly to implement the “Amar Bari, Amar Gram” project to ensure civic amenities in every village so that the villagers could get an improved and beautiful life in line with her party’s election manifesto of 2018.

The PM said they have already started implementing a pilot project of building 10 Bangabandhu Model Villages with all civic amenities, including sanitation, pure drinking water and healthcare services, in line with the Father of the Nation’s cooperatives thought.

“We hope that you will make the initiative successful so that we can develop each village on the basis of it,” she urged the concerned people.

Sheikh Hasina recalled her visit of two model villages in the UK with her father Bangabandhu Sheikh Mujibur Rahman in 1969, saying that Bangabandgu at that time told that he wanted to make the villages of Bangladesh like the model villages of the UK once the country becomes independent.

She said Bangabandhu gave second most priority to the cooperatives so that the people of the villages get improved life and the youth folk get jobs and for this reason he (Bangabandhu) wanted to formulate a policy to decide how to ensure marketing the goods produced by the cooperatives and how the share of its profits would be distributed.

But the Father of the Nation could not do that as he along with most of his family members were assassinated on Aug 15 in 1975, she said, adding that the post-1975 government did nothing in this regard rather gobbled up everything of the cooperatives through illegal means.

After resuming office in 1996, she said, the Awami League government undertook various measures for revival of the cooperative movement, following the footsteps of Father of the Nation Bangabandhu Sheikh Mujibur Rahman, such as building different establishments and enacting necessary laws.

The Father of the Nation had undertaken a project, ‘Cooperative Dairy Project’, in 1973 to set up milk processing factories in five milk producing areas mainly to meet nutritional demands of the people, she said, adding, “Today’s ‘Milk Vita’ is the outcome of Bangabandhu’s far-reaching initiatives.”

Briefly highlighting her government’s initiatives, the PM said that they established the Bangabandhu Poverty Alleviation Training Complex in 1997 and later transformed the training center into a full-fledged academy by enacting a law in 2012.

She further added that the government formulated the Rural Poverty Alleviation Foundation Act, 1999.

Referring to the fresh surge of Covid-19 in the European countries, the PM called upon all to remain cautious about the lethal virus and follow the health guidelines properly as it would become more dangerous with the increase of cold as winter has already set in.