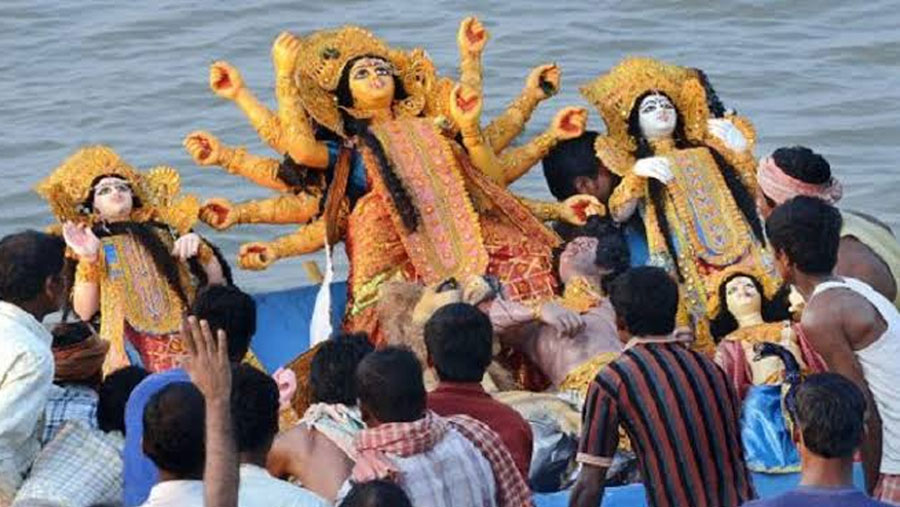 Durga Puja, the biggest religious festival of the Bangalee Hindu community, ended Monday (Oct 26) with immersion of the Goddess Durga in rivers and water bodies across the country amid festivity and strict hygiene guidelines.

The ceremony of bidding farewell to the Goddess in the capital began at around 1:30 p.m. with the immersion of idols in Buriganga river in Wiseghat area. Most idols of the capital were immersed at Swarighat in Buriganga. Idols were also immersed in the Turag river in Tongi, local media reported.

The Mahanagar Puja Celebration Committee instructed everyone to finish the ‘Bisarjan’ ceremony by 6 p.m.

Members of the Coast Guard and Fire Service were on standby along with the police to deal with any situation during the evacuation.

This year there was no procession for worship. Only the persons, who are required to abandon the idol of a mandap (10 people) are asked to come to the ghat with the idol.

Durga Puja is the worship of ‘Shakti’ or divine power embodied in Devi Durga symbolizing the battle between good and evil where the evil forces succumb to the divine forces.

According to the Puranas, after fighting with Mahisasur for 9 days and 9 nights, Goddess Durga won on the tenth day.

The biggest festival of the Bengali Hindu community, started on Thursday, Oct 22 this year, following the rules of health through Chandipath, Bodhan and Devi’s abode.

There were no cultural events like Shidur Khela, dhunuchi dance competitions, distribution of holy offerings and the procession of Bijaya Dashmi.

During the puja, most of the devotees have paid homage in a virtual manner this year, to abide by the health guidelines given by the Bangladesh Puja Celebration Council to stop Coronavirus to spread.

The main attraction of Mahaashtami, widely known as ‘Kumari Puja’ held every year at the Ramakrishna Mission in Dhaka with the aim of awakening this realization of motherhood in all women, was not held due to the pandemic situation.

Today was a public holiday on the occasion of Bijaya Dashami.

On the other hand, the number of puja mandapas in Dhaka metropolis this year was 233. Last year, the number was 237.