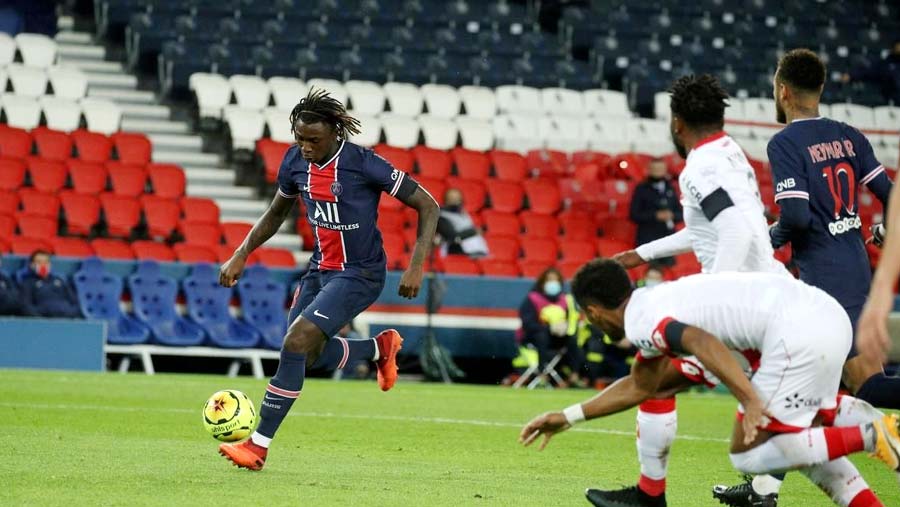 Moise Kean scored his first goals for Paris Saint-Germain as the French champions moved top of the Ligue 1 standings with a 4-0 home victory against lowly Dijon on Saturday (Oct 24).

Italy forward Kean, who joined the capital side on loan from Everton during the closeclose season, found the back of the net in the first half and Kylian Mbappe came off the bench also to score a double to put PSG on 18 points from eight games.

Dijon, who last year won at the Parc des Princes, were never close this time as they stayed bottom of the table on two points.

Lille, who are second on 17 points, will reclaim top spot if they beat Nice away on Sunday.

Kean scored his first goal for PSG when he flicked the ball home at the near post from Mitchel Bakker's cross in the third minute. The Italian doubled their tally 20 minutes later as he tapped in after being set up by Neymar at the end of a counter-attack.

Mbappe replaced Kean in the 73rd minute and the France striker quickly made his presence felt. The 21-year-old, set up by Neymar, outsped the Dijon defence before slotting the ball home in the 82nd minute.

Mbappe was at it again, adding a fourth as he fired home from close range from Pablo Sarabia's pass following some more good work by Neymar.

Meanwhile, Sunday's game between Lens and Nantes has been postponed after 11 members of the home team tested positive for coronavirus.

A Ligue 2 game between Grenoble and Nancy has also been postponed.