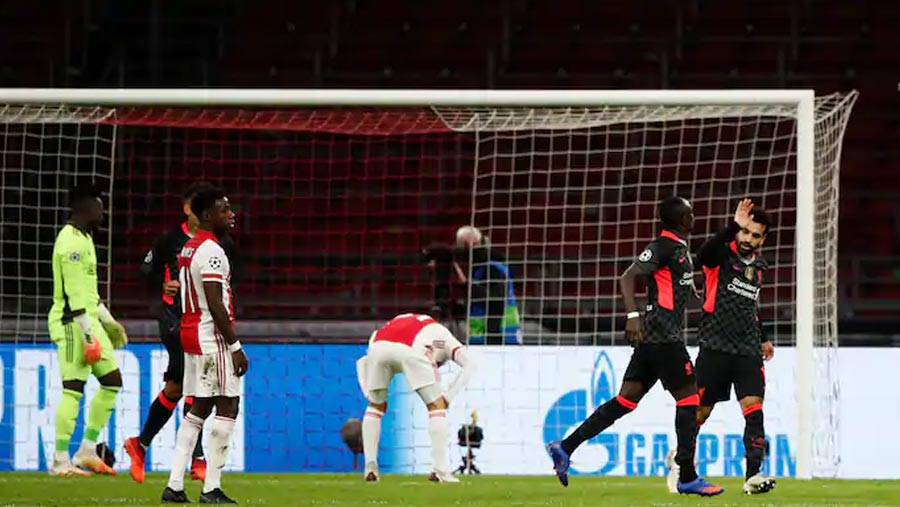 Liverpool’s makeshift defense held firm and a fortunate goal earned Jurgen Klopp’s team a 1-0 victory over Ajax on Wednesday (Oct 21) in their Champions League opener at the empty Johan Cruyff Area. Ajax defender Nicolas Tagliafico turned a mishit shot by Sadio Mane into his own net in the 35th minute for the only goal of the match.

Premier League champions Liverpool were helped by an own goal from Nicolas Tagliafico to get off to a winning start in the Champions League against Ajax.

Jurgen Klopp's injury-hit side, who were without talisman Virgil van Dijk, were tested by Ajax but did enough to leave Amsterdam with a clean sheet.

Tagliafico sliced Sadio Mane's cross into his own net with 10 minutes of the first half remaining, moments after Liverpool keeper Adrian denied Quincy Promes from close range.

Liverpool's Fabinho then acrobatically cleared Dusan Tadic's lob off the line, before Davy Klaassen's powerful effort bounced off the inside of the post in the second half.

The Reds, who also face Atalanta and Midtjylland in Group D, were returning to Europe as English champions for the first time since 1984-85.