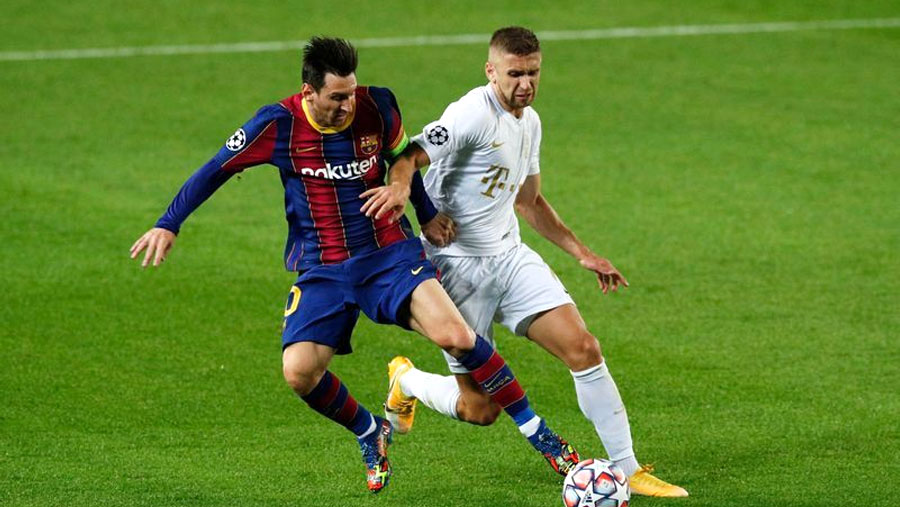 Lionel Messi became the first player to score in 16 consecutive Champions League seasons as he guided 10-man Barcelona to a 5-1 victory over Hungarian side Ferencvaros in their Group G opener at the Camp Nou on Tuesday (Oct 20).

Messi struck from the penalty spot to give Barca the lead after he was felled at the end of a weaving run. Ansu Fati volleyed Barca's second, with Philippe Coutinho adding a third.

Gerard Pique was sent off for a foul that set up Ihor Kharatin to narrow the deficit with a penalty, but Pedri and Ousmane Dembele ensured Barca's win.

Pique's dismissal is a costly one for the Spanish side, with the experienced defender now suspended for their trip to Italian champions Juventus in gameweek two.

But Barca will be lifted by Pedri's low finish, with the teenager already starting to draw attention to himself after just a handful of appearances for the club.

His contribution is a serious rival to Messi's for headline of the evening, with the Argentine forward's goal taking him level with former Manchester United winger Ryan Giggs as the players to have scored in the most separate Champions League campaigns.

Messi also assisted the goal for Dembele, who stepped off the bench to add to what was a mood-brightening evening for the La Liga side, who have spent the summer trying to rebuild after their humiliating exit at the hands of Bayern Munich in last season's Champions League.

They have had an inconsistent start to their league campaign under Ronald Koeman, underlined by a shock loss to Getafe at the weekend.

After that game, Koeman said that the performances of talisman Messi, who spent the summer angling for a move away from the club with whom he has spent his entire career, "could be better".

On Tuesday he was.

The Dutchman also said he did not believe Barca were favourites for either La Liga or the Champions League this season but that "we can go far".

Observers had great reason to doubt even this qualification in the first quarter of Tuesday's game, during which Tokmac Nguen had a superb solo goal ruled out for offside and Isael hammered a drive against the crossbar.

But Messi's strike settled them and from there they grew into the game and began to show a bit of their old swagger.

The re-building job remains a work in progress and the Ferencvaros result is far from a barometer.

But, if Koeman can continue to get a tune out of Messi and consistent support from the likes of Fati, Coutinho, Dembele and Pedri, the future may not be as glum as it once seemed.