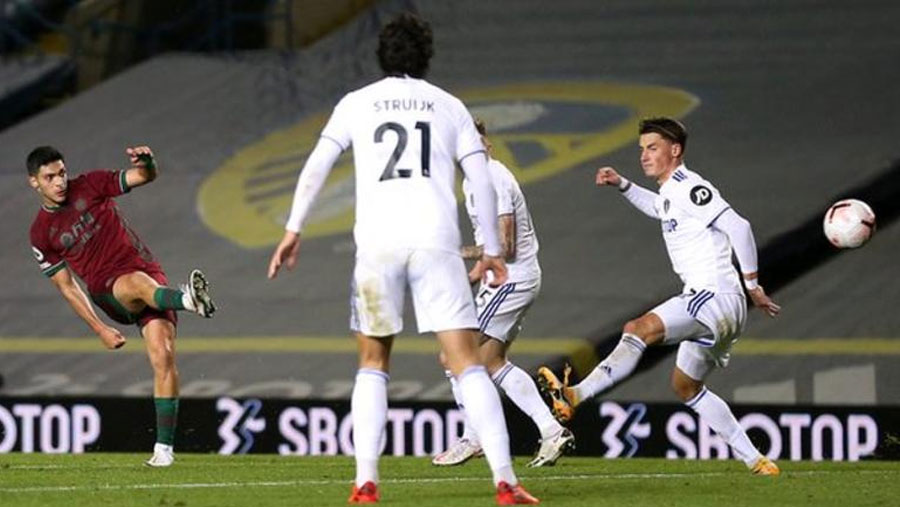 Wolverhampton Wanderers climbed to sixth place in the Premier League on Monday (Oct 19) as Raul Jimenez sealed a 1-0 win at Leeds on a night West Bromwich Albion and Burnley played out the first goalless draw in the English top-flight this season.

The Mexico striker’s third goal of the season made it back to back wins for Wolves after they beat Fulham before the international break.

Leeds have now gone two games without a win as they were beaten for the first time in the league since their narrow opening weekend defeat at champions Liverpool.

Bielsa’s team dominated the first period, pinning Wolves in their own half, but had nothing to show for their dominance as the visitors’ defence held firm.

Leeds striker Patrick Bamford’s early header was ruled out for offside and the hosts had a penalty appeal turned down after Helder Costa went down under Joao Moutinho’s challenge.

Wolves almost snatched the lead against the run of play when Daniel Podence’s close-range shot was saved by Illan Meslier.

Romain Saiss thought he had given Wolves a 54th-minute lead with a superb finish from the edge of the area, but VAR ruled Podence was in an offside position.

Jimenez settled a hard-fought clash in the 70th minute when he cut in from the right flank and darted across the edge of the area before hitting a shot that smacked off Phillips’ head and flashed past the wrong-footed Meslier.

Meanwhile, After a glut of goals across the first 46 Premier League matches since the new season started in September, the entertainment dried up at the Hawthorns.

Between them West Brom and Burnley had conceded a combined 21 goals in their opening seven games. But the 47th match of the Premier League campaign ended without an entry in the scoresheet.

West Brom’s Karlan Grant was denied a debut goal by a tight offside call, while Chris Wood hit the bar for the visitors.

The pair remain winless in the league this season, with Burnley claiming their first point after three defeats to lift them off the bottom of the table.

But a draw did little to kick-start either side’s season as Albion continue to wait for their first victory since promotion.

Grant showed his threat when Grady Diangana picked him out to head in, only for his celebrations to be cut short by an offside flag.

Ashley Westwood’s cross found Wood unmarked at the far post in the closing stages, but the Burnley striker headed against the bar.