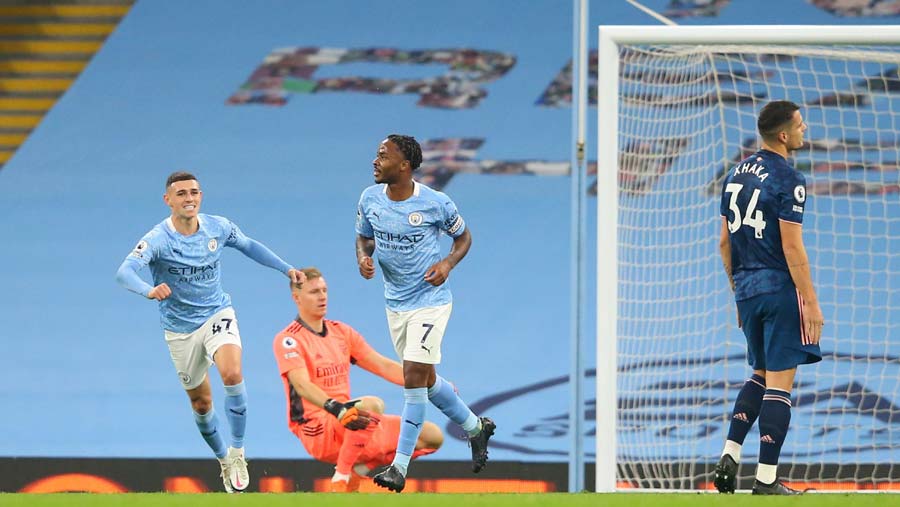 Manchester City eked out a hard-fought 1-0 win over Arsenal in the Premier League on Saturday (Oct 17), thanks to Raheem Sterling’s first-half goal.

Stand-in skipper Raheem Sterling scored the only goal as Manchester City returned to winning ways in their Premier League clash with Arsenal.

Sterling, given the armband by manager Pep Guardiola with Fernandinho on the bench and Kevin de Bruyne injured, finished off the rebound after Phil Foden's 23rd-minute shot had been saved.

Arsenal had chances to level but Man City keeper Ederson denied them with three excellent first-half saves and both David Luiz and Pepe were off target with free-kicks in good positions after the break.

The result extended a miserable run of away results against their fellow 'top six' members for Arsenal. They have now failed to win in their last 29 such meetings, since a success at City in 2015.

Guardiola is yet to drop a point against the Gunners in five encounters at Etihad Stadium since he succeeded Manuel Pellegrini as City manager in 2016.

More importantly for his side, after picking up a single point from their last two games, they were able to claim maximum points in this one.

The three points came even without De Bruyne and with the returning Sergio Aguero restricted to an hour's action on his first appearance since June after recovering from a knee injury.

Aguero escaped a caution after placing his arm on assistant referee Sian Massey-Ellis' neck as he argued against a decision.