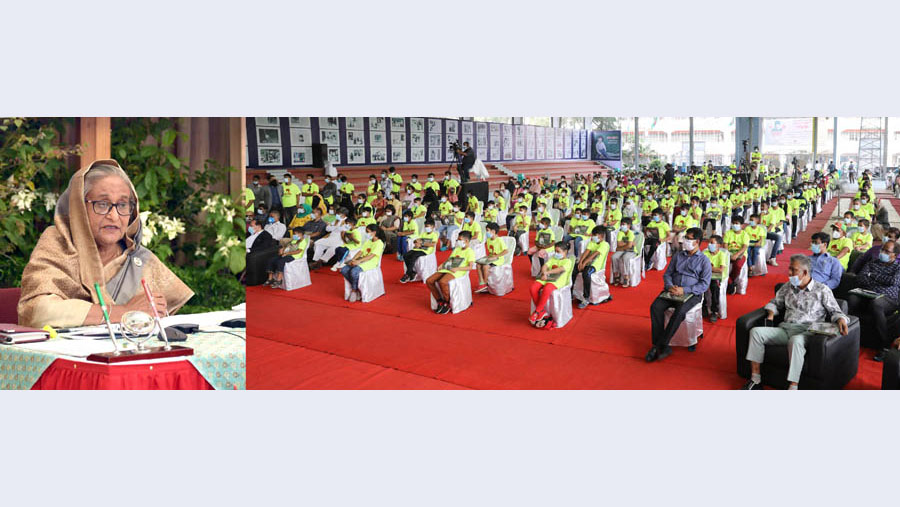 Referring to the brutal killing of her youngest brother Sheikh Russell, Prime Minister Sheikh Hasina today said they didn’t want recurrence of such a heinous crime as her government is working untiringly to let the children live a beautiful life.

“Sheikh Russell was brutally killed. We want such incidents never happen anymore,” she said while virtually addressing a function marking the birth anniversary of Sheikh Russell, from her official Ganabhaban residence in Dhaka, local media reported.

The premier said her government has been working untiringly towards achieving a target of giving the children a beautiful life to live as they would become guardians of the country after being well-educated.

“We want each of our children will be patriots, good human beings and worthy citizens of the country after getting modern education and thus serve the people. And for achieving that particular target, my government has been working tirelessly,” she added.

Mentioning that her youngest brother Sheikh Russell was born on Oct 18 in 1964, Sheikh Hasina said, “Today is the birthday of Sheikh Russell. But he had to go forever at the strike of bullets of the assassins on Aug 15 in 1975 and thus a flower was falling off at its buds.”

The premier prayed for salvation of the departed souls of Sheikh Russell and other martyrs, including the architect of the country Bangabandhu Sheikh Mujibur Rahman.

She also witnessed a video on the activities of Sheikh Russel, unveiled the cover of a book titled ‘Sritir Patay Sheikh Russell’, and distributed prizes among the students getting GPA-5 in the SSC, stipends and laptops among the poor and meritorious students.

On behalf of the premier, State Minister for Information and Communication Technology Zunaid Ahmed Palak distributed the awards and stipends among the students from the BCIC site while PM’s Principal Secretary Dr Ahmad Kaikaus moderated the function from the Ganabhaban.

The premier said, recalling the time when Russell was born, that they all, including her sister Sheikh Rehana, her brothers Sheikh Kamal and Sheikh Jamal, were waiting eagerly to hear the cry of the minor child and to take him on their laps, adding, “That was a very joyous moment for us. The little child was the apple of our eyes.”

She added that Russell always stayed beside Bangabandhu after he got released from the prison in February of 1969 in fear of losing his father as Bangabandhu was arrested in May of 1966 following the announcement of the six-point demand.

“Baba (Bangabandhu) was sent to jail again at a time when Russell was not able to understand that,” she said, adding that Russell truly first met Bangabandhu in the prison.

The premier, in an emotion choked voice, said that Sheikh Russell used to cry at times when their father was in jail.

“Russell did not sleep at night and used to cry on those days when they visited Bangabandhu in jail. ...he (Russell) could not say anything as he was too little as a child, but we had realised his pain and in this way he grew up,” she also said.

She continued that Russell got his father for only three and a half years and everything was finished on Aug 15 in 1975 after the country achieved independence in 1971.

Noting that Sheikh Russell had a dream to be an army officer, she said, “He (Russell) put all children together and did parade whenever we went to our village home for roaming.”

The premier urged all the children to be attentive in their education to be worthy citizens of the country so that they could work to reach fruits to every doorstep of the independence that has been achieved by shedding huge bloods.

“I know the schools are closed due to the coronavirus. It is a matter of pain for any children. Despite the fact, I would say to study attentively and do whatever you know whether it is arts or sports or anything else as you can attend the classes when schools will be opened,” she said.

The PM urged the guardians to look into the matters to encourage their children to study and take part in sports and other extracurricular activities.

She called upon all to follow the health guidelines particularly wearing masks to remain protected from the Covid-19.

“I asked all to put mask on the faces in gatherings. All have to abide by the health guidelines,” she added.