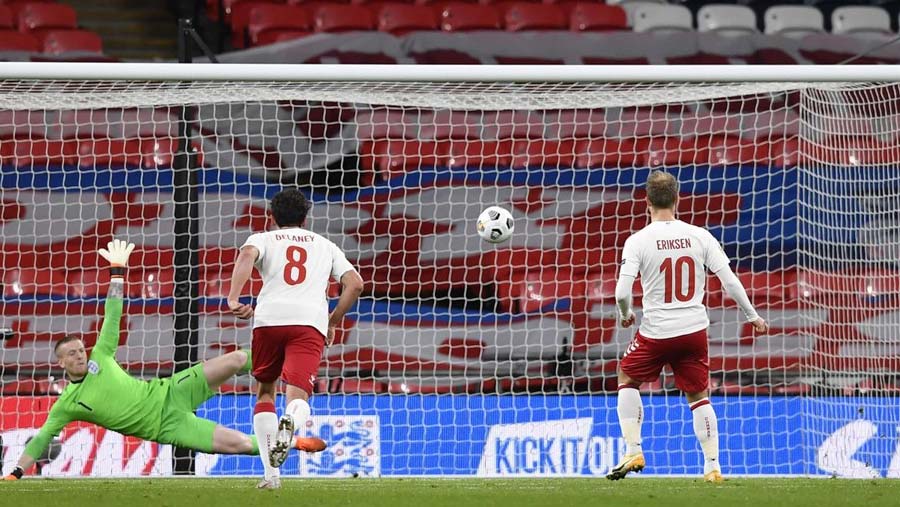 Denmark defeated England 1-0 in the UEFA Nations League clash in Wembley on Wednesday (Oct 14) thanks to a goal by Christian Eriksen on his 100th international appearance. For England, Harry Maguire recevied a red card and the hosts were down to 10 men in the match as they slipped to third behind Belgium and Denmark.

Harry Maguire's miserable start to the season continued with a red card as England had two men sent off for the first time in their Nations League defeat by Denmark.

Manchester United's captain suffered a 31-minute nightmare, shown a yellow card for a reckless early challenge on Yussuf Poulsen and then dismissed by Spanish referee Jesus Gil Manzano after he brought down Kasper Dolberg trying to retrieve his own poor touch.

England's night got worse four minutes later when Christian Eriksen scored his 34th goal for Denmark on his 100th appearance after Kyle Walker was harshly adjudged to have fouled Thomas Delaney.

In a low-key affair, England had their moments and it took a magnificent save from Kasper Schmeichel to claw away Mason Mount's close-range header as Denmark closed out the win.

England are now third in their group, with only the winners progressing to the Nations League finals in 2021.