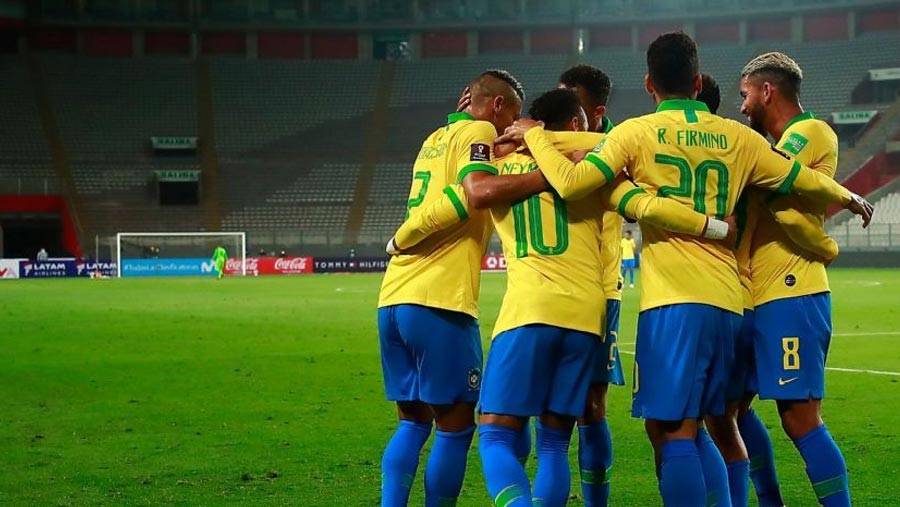 Neymar scored a hat-trick to become the second highest scorer in Brazil’s history as the Copa America champions won 4-2 away to 10-man Peru in a World Cup qualifier on Tuesday (Oct 13).

The goals took Neymar to 64 international strikes, two more than Ronaldo but still well behind Pele’s record of 77.

Peru twice took the lead through Andre Carrillo and a heavily deflected strike from Renato Tapia, but two controversial Neymar penalties, an injury time third and a close range strike from Richarlison maintained the Selecao’s winning start to qualifying for Qatar 2022.

Carrillo opened the scoring on six minutes with a dipping volley from 20 yards after latching onto Marquinhos’s weak clearance.

Brazil dominated the ball but Peru’s pacey forwards looked dangerous on the counter-attack and visiting goalkeeper Weverton had to be alert to keep out a shot from Christofer Gonzales.

But Neymar sent Gallese the wrong way from the spot after Yoshimar Yotun was penalised for tugging his shirt in the box.

Out of nowhere, Tapia’s speculative long-range strike took a wicked deflection off Rodrigo Caio and wrong-footed Weverton on 59 minutes.

The lead lasted only a few minutes before Richarlison touched a Firmino header from a corner over the line to restore parity.

The winner came seven minutes from time as Carlos Zambrano was harshly adjudged to have fouled Neymar.

Worse was still to come for Zambrano as he was sent off minutes later for a stray elbow that caught Richarlison and Neymar drilled home the final nail in Peru’s coffin after Gallese spilled a shot from Everton Ribeiro.

Meanwhile in La Paz, Joaquin Correa scored the winner 11 minutes from time as Argentina labored to a 2-1 victory over Bolivia to maintain their 100% record after two matches; and Ecuador bounced back from their loss in Argentina to stun Uruguay 4-2 in Quito.