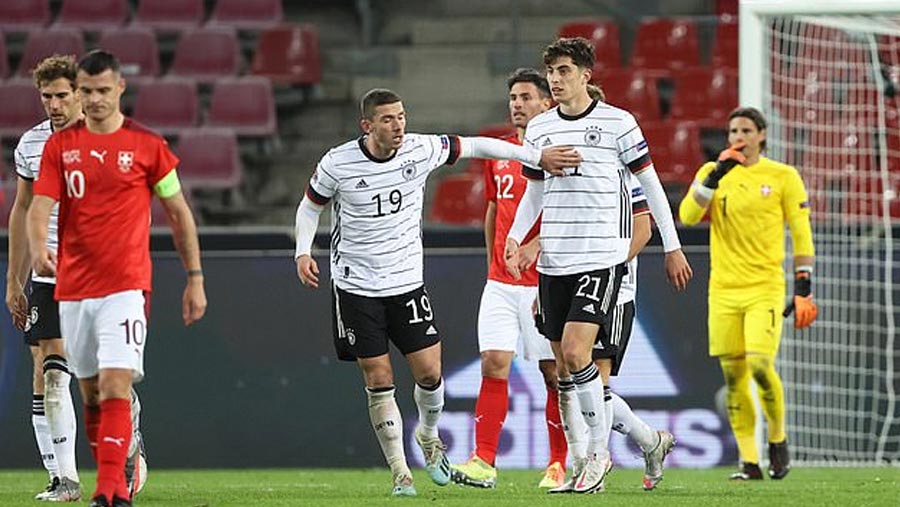 Timo Werner and Kai Havertz both scored as Germany had to twice come from behind to earn a rollercoaster 3-3 draw against visitors Switzerland in an exciting Nations League group game packed with incident on Tuesday (Oct 13). The result moves Germany within a point of League A Group Four leaders Spain, who lost 1-0 away to Ukraine, while the Swiss, who are still without a win, remain bottom.

Kai Havertz and Timo Werner both scored in Germany's entertaining draw with Switzerland in the UEFA Nations League. The Chelsea duo linked up expertly to salvage a point for Germany in a game they had trailed for long periods.

Serge Gnabry scored the final equaliser for the home side with a sensational backheeled shot.

Switzerland had squandered a two-goal lead and finished the game with 10 men, but took a deserved point.

Chelsea boss Frank Lampard will have watched with interest as Antonio Rudiger also featured for the 2014 World Cup winners.

It was a momentous night for midfielder Toni Kroos who earned his 100th cap for Germany, becoming only the 12th player to do so.

Despite allowing 300 fans into the stadium for their friendly against Turkey last week, no fans were present at the RheinEnergieStadion due to a rise in local coronavirus cases.

Switzerland needed a win to avoid the prospect of being relegated to group B, they now sit at the bottom of the table with two points.

Germany will face Ukraine in the next round of matches in November, with both teams level on six points in group A4, after Ukraine beat group leaders Spain 1-0.