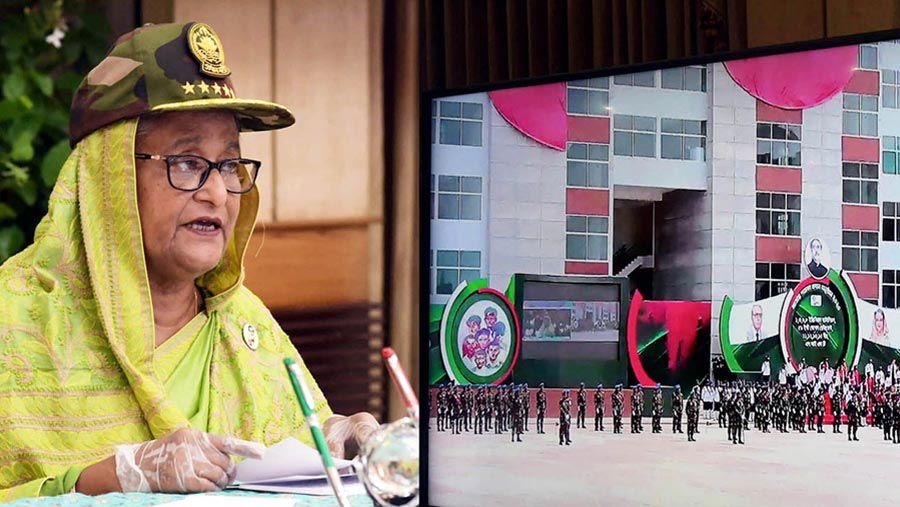 Prime Minister Sheikh Hasina today said her government has been working to transform Bangladesh Army into a time-befitting, well-trained and modern technology and education based force to make it capable enough to face the 21st century’s geopolitical and military challenges.

“We have undertaken necessary programmes to build the army to be more efficient to face the geopolitical and military challenges of the 21st century,” she said as the chief guest in a national standard (national flag) handing over ceremony to 10 units and organizations of the Bangladesh Army.

She simultaneously said they have adopted the “Forces Goal-2030” in accordance with the “Defence Policy” taken by the Father of the Nation in 1974 to build a time-befitting, well-equipped, and modern technology and knowledge based army to keep pace with any force of the world as the Bangladesh Army has been working with other global modern forces in the UN (United Nation) peace keeping missions.

The premier joined the function from her official Ganabhaban residence in Dhaka through a video conference while the concerned army officials got connected from the Savar Cantonment, local media reported.

A smartly turned out contingent of Bangladesh Army gave salute to the PM through a spectacular parade.

The premier said that Father of the Nation Bangabandhu Sheikh Mujibur Rahman established the Awami League and it brought the country’s independence after 24 years of struggle.

“So, it is our duty to ensure the country’s development. The Bangladesh Army is the symbol of independence and sovereignty of the country. Making overall development of the army is also our duty,” she said.

She said that the Bangladesh Army has also been working at the Bangabandhu Bridge on the river Jamuna.

Noting that they (the government) have already made a huge progress in imparting training to army personnel, recruiting manpower and purchasing arms and equipment for the force, she said they have purchased modern gun, missile and ultra modern infantry gadget to enhance the capability of the army.

The PM said that it is a matter of pride for the units and organizations who have received the national flag, which is the emblem of the country’s independence, sovereignty, honour and dignity, during the “Mujib Borsho.”

“It is the sacred duty of every soldier to maintain the honour of the national flag,” she added.

The premier called upon the army personnel to put forward the country by upholding its constitution.

Describing Bangladesh Army as an “asset” of the country and a “symbol” of the confidence and the trust of the people, she also asked its members to be more “professionally-efficient” and “welfare-minded” with social and religious values.

“Bangladesh Army is our asset and a symbol of confidence and trust of the people ... so, you will have to be more competent, efficient, honest and welfare-minded being imbued with social and religious values to achieve the desired standard of professionalism,” she said.

Noting that the countrymen always received constant support of the army, Sheikh Hasina expressed her firm belief that the force will stand beside the people whenever it will be necessary in case of facing any natural disasters.

The premier however thanked the army, navy and air force personnel as they have extended their helping hands to reach relief to distressed people, make people aware of following the health guidelines and arrange burial of the Covid-19 patients.