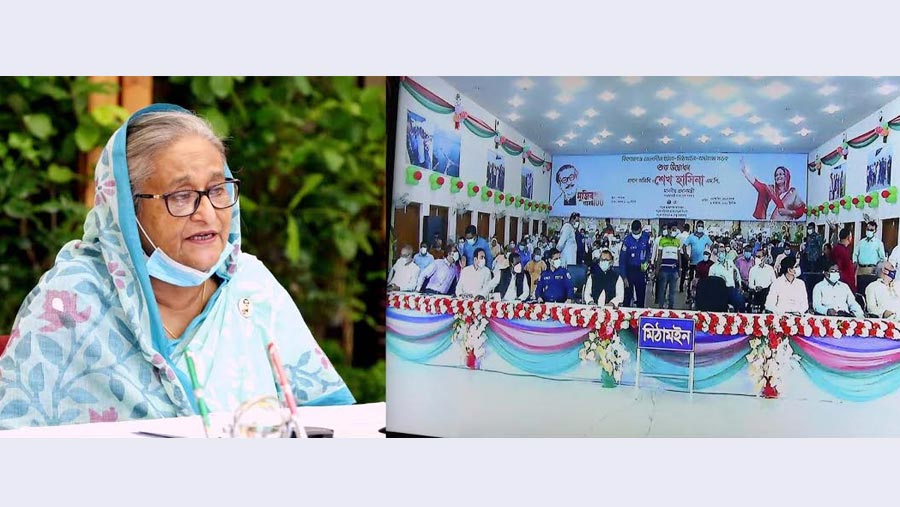 Prime Minister Sheikh Hasina today said the government is taking all-out preparations to keep the district hospitals ready with ICU and necessary oxygen to effectively encounter the possible second wave of the Covid-19 in the approaching winter.

“The outbreak of Coronavirus started last winter. It may come again in the approaching winter. Bearing that in mind, we have been making arrangements for all the medicare services such as installing ICU (intensive care unit) and oxygen in every district hospital,” she said while virtually opening the Itna-Mithamoin-Austagram Highway in Kishoreganj.

The premier simultaneously said her government has instantly given appointment to 2,000 doctors (physicians), 3,000 nurses and technicians soon after the outbreak of the coronavirus to ensure prompt healthcare services to Covid-19 patients.

While exchanging views following the inauguration of the 29.73-km road from her official residence Ganabhaban here through a video conference, she said, “We give it as a ‘gift’ on behalf of the Honourable President in the Mujib Borsho.”

The PM simultaneously thanked President Abdul Hamid for taking the initiative to build such a highway, saying, “We have been able to construct the road due to his (president’s) inspiration and initiative.”

The government has built the road having 14 bridges and 62 culverts under the Road Transport and Highways Division at a cost of Tk 874.08 crore, she said.

The highway connected Nasirnagar of Brahmanbaria to Sylhet and Dhaka and other parts of the country.

A video presentation on the newly constructed highway was screened at the function.

The premier said her government has established community clinics alongside upgrading the district and upazila hospitals to reach healthcare services to every doorstep.

“We have been trying from every side to ensure healthcare services for the Covid-19 patients,” she added.

Mentioning that her government has been tirelessly working for building a prosperous and developed country, she said that the overall development of a country requires adequate power supply and a vast communication network.

She added: “People have already got power. We are reaching power to the remotest areas across the country by setting up solar panels. Alongside this, we have been taking measures to increase power generation and installing more power distribution lines to ensure power for all.”

About the Itna-Mithamoin-Austagram Highway in Kishoreganj, the premier said the sufferings of the people in this region will end with the construction of the road as people now can go quickly to Dhaka through Nasirnagar of Brahmanbaria and Bhairab and thus other parts of the country and can transport their produced goods to different parts of the country.

She added that the people of the Austagram Upazila could send their cheese (panir) which has international standard to Dhaka and even could export using the road.

The premier said her government has been setting up special economic zones at different parts of the country considering which goods are usually produced in the particular areas, as the local people could gain economic solvency.

She said since the Haor region is the source of huge fishes, the government wants to develop relevant industries there to pave the way for cultivating, processing and marketing fishes.

The premier said they are set to build food and other agriculture goods processing industries so that agriculture-dependent regions would not remain dependent on only agriculture to ensure marketing of the goods and thus people will gain financial solvency.