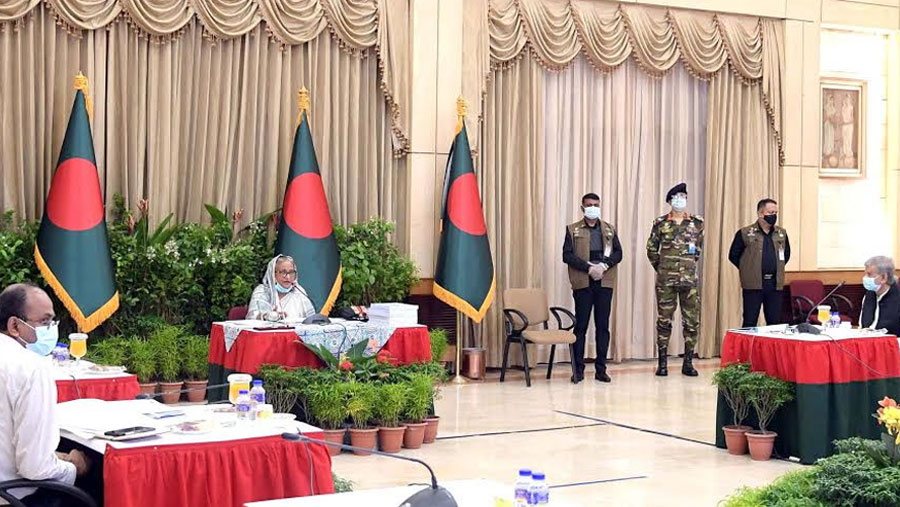 Prime Minister Sheikh Hasina on Tuesday (Oct 6) said the timely stimulus packages given by her government to every sector particularly in agriculture and industrial ones help the country’s economy keep moving during the Covid-19 pandemic.

The premier said this in an introductory speech while presiding over a meeting of the Executive Committee of the National Economic Council (ECNEC) from her official Ganabhaban residence in Dhaka through a video conference.

Sheikh Hasina, also chairperson of the ECNEC, said that they have taken timely initiatives to offset the onslaught of the Covid-19 pandemic on the economy and the livelihoods.

In this connection, she said, “We have taken the initiative (announcing stimulus packages) timely. In doing so, we didn’t even think how much money we have, rather reached money to every sector and the people to keep running the wheels the country’s economy.”

Turning to agriculture, she said, they have given utmost priority to agriculture aimed at increasing the food production so that the people of the country do not suffer from food crisis.

She added: “We have been able to increase food production and thus ensured food security.”

About revival of the industrial sector, the premier said that the country’s trade and commerce have started their reviving soon after they have received the stimulus packages.

She went on saying, “There is no sector which has not received assistance from us. We have reached the stimulus packages to not only the richest businessmen but also to the people involved in all kinds of business. The stimulus packages and cash incentives have boosted the country’s trade and commerce.”

The stimulus packages and cash incentives have also helped the commoners who have lost their jobs due to the coronavirus in easing their hardships.

The PM requested all concerned to reach the information regarding the success of announcing stimulus packages to keep running the country’s economy as many people are habituated to criticise the government’s initiative without knowing properly.